Update Required To play the media you will need to either update your browser to a recent version or update your Flash plugin.
By VOA
18 November, 2012

From VOA Learning English, welcome to THIS IS AMERICA in Special English. This week on our program, we remember the award-winning writer and illustrator Maurice Sendak. He died on May eighth, two thousand twelve, at the age of eighty-three. During his career Maurice Sendak produced more than one hundred children's books. Now here are Faith Lapidus and Shirley Griffith to tell our story.

For over sixty years, his artistic skill brought to life richly imaginative worlds filled with children, animals and magical creatures. Two of his works -- "Where the Wild Things Are" and "In the Night Kitchen" -- helped redefine modern children's literature.

Maurice Sendak was born in nineteen twenty-eight in the Brooklyn part of New York City. His parents were Jewish immigrants from Poland. They met in New York. 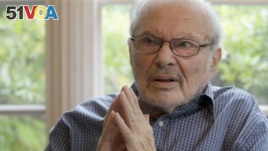 Mauirce Sendak
As a child, Maurice was often sick. As a result, he stayed home and read books and drew pictures to entertain himself.

As an author and illustrator, Maurice Sendak became known for stories that were often dark and intense. For example, "Outside Over There" is about a baby kidnapped by goblins while her older sister is not paying attention. The sister must leave the safety of home to rescue the baby from a strange and dream-like world.

Maurice Sendak said he got the idea for "Outside Over There" from a real-life kidnapping that ended in tragedy. In nineteen thirty-two, the baby son of the famous pilot Charles Lindbergh was kidnapped from home and murdered.

Maurice Sendak was only a small child at the time. But he never forgot his fear as he listened to the radio broadcasts about the Lindbergh baby kidnapping.

The man found guilty of that crime was executed but always declared his innocence.

Maurice Sendak grew up with continuous reminders about death. When he was sick, his grandmother dressed him in white clothes that she thought would help him avoid dying.

During World War Two many of his family members in Europe were murdered in the Nazi German death camps. He remembers his mother screaming and crying each time she learned that another family member had been killed. Sometimes his parents would talk about the dead relatives, especially the children.

These influences help explain an important part of Maurice Sendak's books. They often show children dealing with and overcoming evil forces and other complex situations. Many of his stories are about a child trying to survive while facing fears or other difficult emotions.

One of the first books that Maurice Sendak worked on as an artist was "A Hole is to Dig: A First Book of First Definitions." To write the book, Ruth Krauss asked young children how they would define words like "face," "dog" and "party." The book, published in nineteen fifty-two, brought wide attention to Maurice Sendak's artwork. A few years later, he drew pictures for the first "Little Bear" books, written by Else Minarik.

In nineteen sixty-two he published the "Nutshell Library." These were four little books in a box measuring about seven by ten centimeters. The books are "Alligators All Around," "One Was Johnny," "Chicken Soup with Rice" and "Pierre."

"Pierre" is a funny story about a little boy who behaves badly. Every time his parents ask him a question, he gives them the same answer: "I don't care."

Then something happens to Pierre. He gets eaten by a hungry lion. But the story has a happy ending. Pierre changes his behavior when he gets reunited with his parents.

Maurice Sendak's drawings are very expressive. His landscapes are beautifully detailed and his monsters are more loveable than they are frightening.

In a YouTube video posted by the Rosenbach Museum, Maurice Sendak talks about what it means to be an illustrator.

"An illustrator, in my own mind, and this is not a truth of any kind, is someone who so falls in love with writing, that he wishes he had written it and the closest he can get to it is illustrating it. And the next thing you learn, you have to find something unique in this book, which perhaps even the author was not entirely aware of. And that's what you hold onto and that's what you add to the pictures. A whole other story that you believe in, that you think is there. When you find another story in a story, that's the story I am telling the children."

In nineteen sixty-three Maurice Sendak published "Where the Wild Things Are." The story is about the adventures of a rebellious young boy named Max. Max likes to dress up so he looks like a wolf. One evening, his mother sends him to his room without dinner as punishment for misbehaving. Max enters an imaginary world of large, frightening creatures. These Wild Things make him their ruler. But he becomes lonely and wants to return home.

At first, Maurice Sendak wanted to make the story about wild horses. But he could not draw horses very well. Instead, he drew the creatures to look like the members of his family in Brooklyn.

Some critics thought the book was too frightening for children. Some libraries even banned it. But "Where the Wild Things Are" became a classic -- one of the bestselling children's books of all time. A movie version directed by Spike Jonze came out in two thousand nine.

When Maurice Sendak began his career, many of the stories in children's books presented a happy and perfect world. He wrote books that were honest and sometimes very serious. The popularity of his work widened the list of subjects considered acceptable for children's books.

In nineteen seventy Maurice Sendak published "In the Night Kitchen." It tells the story of a little boy named Mickey. Mickey enters the dream world of a night kitchen. He falls into a large container of cake batter being mixed by three fat cooks. He makes an airplane out of bread dough and flies around the kitchen. Some people criticized the book because Mickey is shown without his clothes as he falls into the batter. But "In the Night Kitchen" was a big success.

Where the bakers who bake till the dawn so we can have cake in the morn mixed Mickey in batter, chanting: Milk in the batter! Milk in the batter! Stir it! Scrape it! Make it! Bake it! And they put that batter up to bake a delicious Mickey-cake. But right in the middle of the steaming and the making and the smelling and the baking Mickey poked through and said: I'm not the milk and the milk's not me! I'm Mickey!

Over the years, Maurice Sendak also worked on many theater productions. He helped make "Where the Wild Things Are" into an opera. He also created set designs for productions of "The Nutcracker" and "The Magic Flute."

In two thousand three, Maurice Sendak worked with the playwright Tony Kushner on a picture book called "Brundibar." The book is based on a children's opera by the Jewish Czech composer Hans Krasa. Two poor children must buy milk for their sick mother. They try to raise money from the people in their town by singing on the street. A mean man named Brundibar chases them away. But, with the help of a group of children and some talking animals, they raise the money to buy the milk.

This opera was first performed in nineteen forty-two at a Jewish children's orphanage in Prague, in what was then Czechoslovakia. Then Krasa and the children were sent to a Nazi concentration camp, along with most of the other Jews of Prague. Krasa directed the children as they performed the opera fifty-five times at the camp, before they were killed.

Maurice Sendak said that "Brundibar" represented the sadness he felt about losing family in the Holocaust. He thought that the book might help him move on from always thinking about his family's past. He and Tony Kushner worked together to stage their own version of "Brundibar" as an opera for children.

Maurice Sendak won many awards including the Living Legend honor from the Library of Congress. He also won every major award for children's literature. Time magazine called him "the Picasso of children's books."

The largest collection of his art can be found at the Rosenbach Museum & Library in Philadelphia, Pennsylvania. Maurice Sendak chose the museum in the late nineteen seventies to house his works. The collection includes more than ten thousand drawings, manuscripts, books and other items.
Related Articles
go top