Update Required To play the media you will need to either update your browser to a recent version or update your Flash plugin.
By Alice Bryant
30 March 2021


Every day, Rani Khan gives lessons at the first transgender-only Islamic religious school in Pakistan. Wearing a long cloth covering over her hair, she teaches from the Muslim holy book, the Quran.

Khan, who is 34 years old, used money she had been saving for years to set up the school. 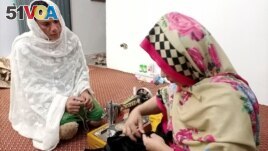 Rani Khan, a transgender woman who teaches the Quran at Pakistan's first transgender only madrasa or a religious school, looks at one of her students during a tailoring lesson in Islamabad, Pakistan March 10, 2021. (REUTERS/Salahuddin)

The Islamic school, or madrasa, is important for the LGBTQ community in the majority Muslim country of Pakistan.

At the school, other transgender people have their heads similarly covered. They sit behind Khan, moving side to side, as they read parts of the Muslim holy book aloud.

Khan explains that, earlier in her life, she had turned to "wrongdoing."

Trying not to cry, Khan remembered how she was rejected by her family at 13 years of age. Because of it, she was forced into a life of begging for money.

At age 17, she joined a transgender group, dancing at marriage ceremonies and other events. But she quit the group to connect with her religion. One night, she had a dream about a deceased transgender friend and dancer. In the dream, the friend begged her to do something for the community.

Khan took the dream as a sign and began studying the Quran at home. She also attended religious schools. Then, in October 2020, she opened the two-room madrasa.

"I'm teaching the Quran to please God, to make my life here" and in the afterlife, Khan said. She explained how the madrasa offered a place for transgender people to pray, learn about Islam and make up for past actions.

She said the school has not received financial aid from the government. But some officials have promised to help students find jobs.

The school has received some individual donations. Khan is also teaching her students how to make clothing. She hopes the school can raise money by selling clothes.

In 2018, Pakistan's parliament officially recognized the third gender. The change gives transgender individuals the ability to vote and choose their gender on official documents.

Still, transgender people are considered outsiders in the country. They often have no means of survival except begging, dancing and prostitution.

The madrasa could help transgender people move closer to acceptance in Pakistani society, said Hamza Shafqaat. He is a lead government official in Islamabad, the capital city.

Shafqaat told Reuters he is hopeful that if you copy this school model in other cities, things will improve.

A religious school for transgender Muslims has also opened in Dhaka, the capital of nearby Bangladesh. And last year a Christian transgender group started its own church in Pakistan's busy southern city of Karachi.

Pakistan's 2017 census recorded about 10,000 transgender people. But transgender rights groups say the number could now be well over 300,000 in the country of 220 million people.

"It is much better than a life full of insults," the 19-year-old added.

transgender –adj. of or relating to people who feel that their true nature does not match their sex at birth

mosque –n. a building that is used for Muslim religious services

beg –v. to ask people for money or food

prostitution –n. the work of having sex for money

census –n. the official counting of people in a country or area