'Transients in Arcadia' by O. Henry

Update Required To play the media you will need to either update your browser to a recent version or update your Flash plugin.
By VOA
31 July 2020


We present the short story "Transients in Arcadia," by O. Henry. The story was originally adapted and recorded by the U.S. Department of State.

There is a certain hotel on Broadway that is very pleasant in the summer. Not many people have heard about it. It is wide and cool. Its rooms have walls of dark wood. There are green trees around it, and soft winds. It has all the pleasures of mountain living, and none of the pains. You will eat better fish there than you could catch for yourself in streams in the hills. You will have better meat than a hunter brings home from the forest.

A few have discovered this cool spot in the hot summer of New York. You will see these few guests, eating dinner in the hotel restaurant. They are happy to be there, and happy to know that they are very few. They feel especially wise because they have found this delightful place. 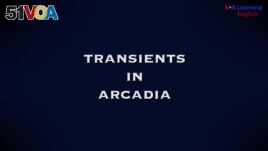 'Transients in Arcadia' by O. Henry

More waiters than necessary are always near. They bring what is wanted before anyone asks for it.

The pleasing distant noise of Broadway sounds like running water in a forest. At every strange footstep, the guests turn quickly and look. They are afraid that the restless pleasure-seekers will find their hotel and destroy its pleasant quiet.

And so these few live during the hot season. They enjoy the delights of mountain and seashore. All is brought to them in their Broadway hotel.

This summer a lady came to the hotel giving this name: "Madame Héloise D'Arcy Beaumont."

The name was like a name in the story of a great romance. And Madame Beaumont was the kind of lady the Hotel Lotus loved. She was beautiful and her manner was very fine. Everyone wished to serve her. The other guests believed that as a guest she was perfection.

This perfect guest did not often leave the hotel. In this, she was like the other guests of the Hotel Lotus. To enjoy that hotel, one needed to forget the city. New York might have been miles away. At night sometimes one might go out. But during the hot day one remained in the cool shade of the Lotus.

Madame was alone in the Hotel Lotus. She was alone as a queen is alone, because of her high position. She rose from bed late in the morning. She was then a sweet, soft person who seemed to shine quietly.

But at dinner she was different. She would wear a beautiful dress. I cannot find words fine enough to tell about it. Always there were red flowers at her shoulder. When the head waiter saw a dress like this, he met it at the door. You thought of Paris when you saw it, and of the theater and of old romances.

It was no surprise, they said, that such a lady should choose the Hotel Lotus. It was the most desirable and the most restful place in America during the heat of summer.

On the third day of Madame Beaumont's stay in the hotel, a young man entered as a guest. His clothes were quiet but good. His face was pleasant. His expression was that of a man who had traveled and could understand the world. He said that he would remain three or four days. He asked about the sailing of certain ships. He seemed to like this hotel the best of all he had known.

The young man put his name on the list of hotel guests: Harold Farrington. It was a name with a fine sound. And the young man belonged perfectly in the quiet life of the Lotus. In one day he became like all the other guests. Like them he had his table and his waiter. He also had the same fear that the wrong people might suddenly discover this hotel and destroy its peace.

After dinner on the next day, Madame Beaumont dropped something as she passed Harold Farrington's table. He picked it up and, following her, returned it. He spoke only a few quiet words as he did this, and she was pleased by his good manners. She knew that he was a gentleman.

Guests of the Lotus seemed to understand each other very easily. Perhaps it was the result of having discovered this Broadway hotel. Guests felt sure that only especially fine people would enjoy the cool delights of the Lotus. Now, very quickly, a sudden friendship grew between Farrington and Madame Beaumont. They stood and talked for a few moments.

"I have seen too much of the usual summer hotels," said Madame Beaumont, with a small but sweet smile. "Why go to the mountains or the seashore? We cannot escape noise and dust there. The people who make noise and dust follow us there."

"Even on the ocean," said Farrington, sadly, "those same people are all around us. What shall we do when they discover the Lotus?"

"I hope they don't discover the Lotus this week," said Madame. "I only know one other place I like as well. It is the beautiful home of a prince in the mountains in Europe."

"The best people," said Farrington, "are seeking for the quiet places, like this one, where they can escape the crowds."

"I promise myself three more days of this delightful rest," said Madame Beaumont. "The next day my ship sails."

Harold Farrington's eyes showed that he was sorry. "I too must leave then," he said. "But I am not sailing for Europe."

"We cannot stay here forever, though it is so delightful," said Madame Beaumont. "I like it better than my usual life, which is too full of people. I shall never forget my week in the Hotel Lotus."

"Nor shall I," said Farrington in a low voice. "And I shall never like the ship that carries you away."

On their last evening the two sat together at a little table. A waiter brought them something cool to eat.

Madame Beaumont was wearing the same beautiful dress. She seemed thoughtful. When she had finished eating, she took out a dollar.

"Mr. Farrington," she said, with the smile that everyone in the Lotus loved, "I want to tell you something. I'm going to leave early tomorrow morning because I must go back to work. I work selling women's clothes at Casey's shop. That dollar is all the money I have. I won't have any more until I get paid at the end of the week. You're a real gentleman and you've been good to me. I wanted to tell you before I went.

"For a year I've been planning to come here. Each week I put aside a little of my pay, so that I would have enough money. I wanted to live one week like a rich lady. I wanted to get up in the morning when I wished. I wanted to be served by waiters. I wanted to have the best of everything. Now I've done it, and I've been happier than I ever was before. And now I'm going back to work.

"I—I wanted to tell you about it, Mr. Farrington, because I—I thought you liked me, and I—I liked you. This week I've told you many things that weren't true. I told you things I've read about. They never happened to me. I've been living in a story. It wasn't real. I wanted you to think I was a great lady.

"This dress I'm wearing—it's the only pretty dress I own. I haven't paid for it yet. I'm paying for it a little at a time.

"The price was seventy-five dollars. It was made for me at O'Dowd and Levinsky's shop. I paid ten dollars first, and now I have to pay a dollar a week until it's all paid.

"And that's all I have to say, Mr. Farrington, except that my name is Mamie Siviter, and not Madame Beaumont. Thank you for listening to me. This dollar is the dollar I'm going to pay for my dress tomorrow. And now I'll go up to my room."

As Harold Farrington listened, his face had not changed. When she had finished, he took out a small book and began to write in it. Then he pulled out the small page with his writing on it, and gave it to her. And he took the dollar from her hand.

"I go to work too, tomorrow morning," he said. "And I decided to begin now. That paper says you've paid your dollar for this week. I've been working for O'Dowd and Levinsky for three years. Strange, isn't it? We both had the same idea. I always wanted to stay at a good hotel. I get twenty dollars a week. Like you, I put aside a little money at a time, until I had enough. Listen, Mamie. Will you go to the pleasure park on Coney Island with me on pay day?"

The girl who had been Madame Héloise D'Arcy Beaumont smiled.

"I'd love to go, Mr. Farrington. Coney will be all right, although we did live here with rich people for a week." They could hear the night noises of the hot city. Inside the Hotel Lotus it was cool. The waiter stood near, ready to get anything they asked for.

Madame Beaumont started up to her room for the last time.

And he said, "Forget that ‘Harold Farrington,' will you? McManus is the name—James McManus. Some call me Jimmy."

Now it's your turn to use the words in this story. Have you ever lied to people about who you are or where you are from? Do you dream of living a different life? Let us know in the comments section or on 51VOA.COM.

guest(s) – n. a person who pays to stay at a hotel or eat at a restaurant

waiter(s) – n. a man who serves food or drinks to people in a restaurant or hotel

footstep – n. the sound of a foot making a step

seashore – n. the land along the edge of the sea that is usually covered with sand or rocks

manner – n. the way that a person normally behaves especially while with other people

dress – n. a piece of clothing for a woman or a girl that has a top part that covers the upper body and a skirt that hangs down to cover the legs

shop – n. a building or room where goods and services are sold