Update Required To play the media you will need to either update your browser to a recent version or update your Flash plugin.
By Dan Friedell
03 October, 2016

Over 10 years ago, scientists from the United States went on a trip to Panama.

The scientists were from Atlanta, in the state of Georgia, and Southern Illinois University, in Carbondale, Illinois. They were worried that a disease might infect and destroy trees and plants in Panama. 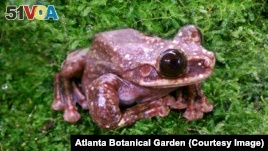 A Rabbs' fringe-limbed tree frog died at the Atlanta Botanical Garden in late September. It was the last known one alive.

The plant life served as home to many frogs and other small amphibians, like toads and salamanders. The scientists wanted to collect a few live amphibians from the area in case the remaining ones died.

One of the animals they collected was later named the "Rabbs' fringe-limbed tree frog." One scientist from Georgia said the frog was completely unknown to experts before the trip.

The Atlanta Journal-Constitution says the tree disease eventually did spread to Panama, and many of the frogs disappeared.

The Rabbs' frog lived in a special enclosed area at the Atlanta Botanical Garden. He was named "Toughie." He lived there for the last eight years, but he died late last month.

Toughie was over 11 years old. He was the last living member of the species in captivity.

One Twitter user reacted this way: "We need to do more to protect our wildlife and planet. It's such a shame when a species becomes extinct."

Leilani Munter is a race car driver and a biologist. She wrote that seeing the frog was kind of like "meeting a little unicorn – the last of his kind."

What do you think of the tree frog's death? We want to hear from you. Write to us in the Comments Section or on 51VOA.COM.

fringe – n. a narrow area along the edge of something

unicorn – n. an imaginary animals that looks like a horse and with a horn growing from its head