Update Required To play the media you will need to either update your browser to a recent version or update your Flash plugin.
By Dan Friedell
09 March, 2016

He is the only producer that would offer them a recording contract after they had been rejected by many others. 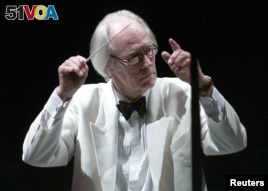 Sir George Martin conducts the Hollywood Bowl Orchestra with a program of music by the Beatles.

Martin died on March 8. The news came out on the morning of March 9. He was 90 years old.

According to an obituary in the Washington Post, Martin studied piano while he was a boy in London before World War II. He entered the Navy during the war, then studied music and oboe.

He started his career with the British Broadcasting Corporation, working in the music library.

In 1950, he went to work for the record company EMI. Twelve years later, he met The Beatles. And a short time after, he helped them create their first big hit, called "Please Please Me," in early 1963.

McCartney and Starr used Twitter to send messages expressing their respect for Martin and their sadness about his death.

McCartney said: "The world has lost a truly great man," and "he was like a second father to me." He posted a photo of the two of them from a recording session and referred people to a longer blog post on his website.

Starr posted a message saying, "Thank you for all your love and kindness, George, Peace and Love..." It also included a photo of The Beatles with Martin when they were just getting started.

Lots of people expressed their feelings about Martin and The Beatles after hearing the news.

Martin was the top trending topic on Twitter, with almost 300,000 mentions.

Mark Ronson, another British music producer who earned his fame more recently by working with Amy Winehouse and Bruno Mars, said "we will never stop living in the world you helped create."

What is your favorite Beatles song from the time Martin worked with the band? Write to us in the Comments Section or on 51VOA.COM.

producer – n. someone who supervises the recording (or production) of a performer's music.

contract – n. a legal agreement between people and businesses to produce work for pay

hit – n. something that is very successful, like a song, movie or book

slang – n. words and expressions that are considered informal in speech

obituary – n. a report in a newspaper about the life of someone who has died recently