Update Required To play the media you will need to either update your browser to a recent version or update your Flash plugin.
By Dan Friedell
19 February, 2016

The Franciscan or Plata River dolphin is a threatened species that lives in the waters off the coasts of Argentina, Brazil and Uruguay.

It is one of the smallest dolphins in the world, measuring only between 1.3 and 1.7 meters long. Their small size makes it easy for humans to approach them. The young dolphins are even smaller. 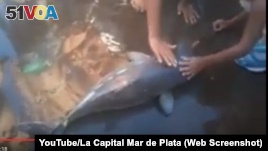 A crowd gathers around a small dolphin taken from the ocean in Argentina.

Photos came out recently showing people on a beach in Argentina, southeast of Buenos Aires, taking photos with two of these small dolphins.

At least one of them died, says Vida Silvestre, a wildlife foundation in Argentina.

People passed the dolphins around, taking photos. One of the dolphins eventually died because of dehydration.

Dolphins cannot survive very long without being in the water.

Even through dolphins are mammals and breathe air, they must be in water so their body temperature does not get too high.

Vida Silvestre says it is likely there are fewer than 30,000 of these dolphins alive. The major threat to the dolphins are fishing nets, not people. But on this day, people caused a death. And on social media, people are furious.

Their reactions are similar to what happened last year when the news came out that Cecil the Lion was killed in Zimbabwe. An American hunter killed the protected lion.

The people on the beach are being called "morons," and being accused of having "no brains." One person said she was "absolutely raging."

Here are some of the photos of the scene, and the comments people posted when hearing the news.

One person offered an idea for how to punish the beach-goers.

"Pass them around amongst ourselves until they also die."

What would you do about the people who took the dolphin from the water? Write to us in the Comments Section or on 51VOA.COM.

dehydrate – v. to lose too much water, become dry

raging – v. to have a strong feeling of anger that is difficult to control