Update Required To play the media you will need to either update your browser to a recent version or update your Flash plugin.
By Dan Friedell
29 February, 2016

That seemed to be on the minds of Twitter, Facebook and Google users everywhere on Monday, February 29.

The hashtag #LeapDay was the top trending topic on Twitter Monday morning with almost 150,000 mentions.

Google is known for greeting users on its search engine page with something called a Google Doodle. It celebrated Leap Day with an animation of a rabbit leaping between two other sleeping rabbits. One was marked 1, for March 1. The other was marked 28, for February 28. 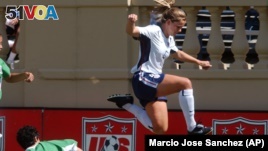 February 29 is Leap Day. Lots of people celebrated by posting photos like this one, of a leaping athlete, to celebrate.

People all over the world clearly enjoyed posting photos to Twitter and Facebook of different things known for their leaping ability.

Frogs, squirrels, cats and other animals jumped all day long.

But here are some creative leaping things that caught our eye.

First, the Juventus soccer team from Italy made a video of their star goalie Gianluigi Buffon leaping to prevent shots from making it into the goal.

The American Ballet Theatre posted a photo of a pair of ballerinas in mid-flight.

Major League Baseball got in the act with some of the amazing catches its players made last season.

Even NASA posted a photo explaining why Leap Year is a necessity.

If you did not know, it is because it takes 365.25 days for the earth to circle the sun.

So every four years the calendar has an extra day to make up for the difference.

But perhaps the most fun Leap Day message came in relation to Leonardo DiCaprio's Oscar win on Sunday night. After multiple nominations over the years, DiCaprio won his first Oscar for his role in the movie "The Revenant."

The Huffington Post said that he had to wait for a Leap Year to win, so he could have an extra day to celebrate.

What did you to do celebrate Leap Day? Write to us in the Comments Section or on 51VOA.COM.

ballerina – n. a woman dancer who performs at a ballet

doodle – n. a kind of drawing that is made without much thought or preparation

animation – n. a way of making a movie by using a series of drawings, computer graphics, or photographs of objects (such as puppets or models) that are slightly different from one another and that when viewed quickly one after another create the appearance of movement