Update Required To play the media you will need to either update your browser to a recent version or update your Flash plugin.
By Dan Friedell
07 March, 2016

There are still lots of undiscovered areas around the globe – but most are below the surface of the ocean.

Recently, the U.S. National Oceanic and Atmospheric Administration, or NOAA, discovered something new on the ocean floor.

And everyone is calling it "cute" and "adorable". 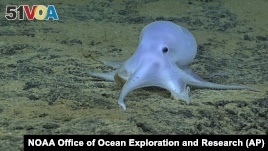 A new octopus species may have been found on the ocean floor near Hawaii.

And people on social media love it.

Scientists say it might be a new species of octopus. It is similar to some octopi that live in shallow water, but this one was found more than 4,000 meters below the surface.

Before this new discovery, the only octopi found in water this deep were very different.

Some people want to name it Casper after the famous ghost of cartoons and movies.

NOAA posted a video to YouTube of the octopus sitting on the ocean floor and wiggling its arms. It has more than 200,000 views since March 3.

The magazine Popular Science called the octopus a "cutie." And wrote about it with this headline "Aww and Awe..."

"Aww" is the sound people make when they are looking at something cute, like a puppy or baby. "Awe" is a word used to describe something unique and impressive.

But the octopus is not only "cute" and "adorable." It looks to be an important scientific discovery. The scientists at NOAA say the octopus may be part of a new species.

And the funny thing is, NOAA was not looking for new sea creatures. It is investigating the way some islands near the U.S. state of Hawaii formed many years ago.

To do this, the scientists aboard a ship drop some remote-controlled submarines into the ocean. They go down to the floor, more than 4,000 meters deep, and collect rock samples.

As soon as the investigators saw this octopus, they said it was "beautiful ... different than the two we got on video last year." They also said it was definitely not in the "HURL guide," which is a directory of undersea creatures in the Pacific Ocean.

NOAA released images and video of this new octopus in early March and people on social media sites started talking about it over the weekend.

What do you think of the new octopus? Write to us in the Comments Section or on 51VOA.COM.

awe – n. a strong feeling of fear or respect and also wonder

remote control – n. a process or system that makes it possible to control something from a distance by using electronic signals

wiggle – v. to move up and down or from side to side with short quick motions

globe - n. an object shaped like a large ball with a map of the world on it

ghost - n. the spirit of a dead person

cartoon - n. a series of pictures that tell a story