Update Required To play the media you will need to either update your browser to a recent version or update your Flash plugin.
By Dan Friedell
29 June, 2016

Pat Summitt led the women's basketball program at the University of Tennessee for 38 years.

Summitt started coaching the university's women's team while in her early twenties.

Two years after being named head coach, she was co-captain of the United States women's basketball team. That team won the silver medal at the 1976 Olympics. She later won a gold medal as the U.S. team's coach.

Summitt was one of the most influential and successful college basketball coaches ever. Her University of Tennessee teams won almost 1,100 games and eight championships.

Many of her players went on to become coaches or to play professional basketball.

Pat Summitt died on Tuesday. She was 64 years old. Five years ago, doctors found she had early-onset Alzheimer's disease.

Americans have been reacting to her death.

President Barack Obama released a statement. It said: "she outworked her rivals, made winning an attitude, loved her players like family, and became a role model to millions of Americans, including our two daughters."

In 2011, Pat Summitt announced that she had the disease and planned to retire from coaching. She left her position a year later.

Summitt got her start in sports before the United States had laws requiring women and men to be treated equally in school sports. 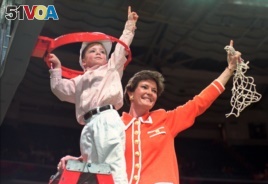 Sometimes she and her players would sleep in another team's training area before a game because they did not have money for hotel rooms.

But her success could not be ignored, and women's basketball is now one of the most-watched college sports in the U.S.

Kara Lawson played for Pat Summitt at the University of Tennessee. Lawson went on to play professional basketball and won an Olympic gold medal.

Her reaction to Summit's death was simple. She wrote "Gutted. I love you. Thank you."

Tennis great Billie Jean King broke gender barriers during her career. She wrote: "Pat Summit was an all-time great with a brilliant mind, a love of basketball and a deep loyalty to all around her."

Abby Wambach was a star on the U.S. women's soccer team for many years. She called Summitt "a hero of mine."

Becky Hammon is an assistant coach with the National Basketball Association's San Antonio Spurs. She called Summitt "a true pioneer and one of the greatest of all time."

Dan Friedell wrote this story for Learning English. Additional information came from a report on VOANews.com. George Grow was the editor.

What do you think of the reaction to Pat Summitt's death? We want to know. Write to us in the Comments Section or on 51VOA.COM.

role model – n. someone who another person admires and tries to be like