Update Required To play the media you will need to either update your browser to a recent version or update your Flash plugin.
By VOA
26 December, 2015

A story "goes viral" if it starts small and becomes important as it moves from person to person along social networks. The term comes from the medical term "virus."

There were a number of breaking news stories that took over both news headlines and social media channels at the same time.

Early in 2015, a group of terrorists attacked the offices of French magazine Charlie Hebdo. They killed 11 people in the magazine's office and wounded 11 others. After several days, the terrorists were killed during a shootout with French police. 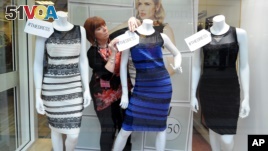 As people were following the story, the hashtag #JeSuisCharlie gained momentum. "Je Suis Charlie" translates from French into English, as "I am Charlie."

On November 13, a different group of terrorists stunned the world with another series of attacks in the French capital. The terrorists killed 129 people and injured hundreds at a concert, at a sporting event and at restaurants around the city.

The hashtag #PrayforParis emerged as a way for people to express sympathy about those attacks and quickly sort through posts on social media sites.

But there were other stories that became newsworthy after becoming popular on social media first.

By now, everyone has heard of "The Dress." It started when a woman in Great Britain posted a photo of a dress she liked on the blog Tumblr. She wondered if the dress had blue and black stripes or white and gold stripes.

The Tumblr post was not a big deal until one social news website – Buzzfeed – picked up the thread and asked readers to vote on the color of the dress.

The poll received more than three million votes. The trending hashtag #TheDress and the important debate about its color got people stirred-up.

On the same day, a silly video of two Llamas running loose around an Arizona city captured the attention of everyone online and on cable news networks.

Megan Garafola is a digital strategist at Ogilvy Public Relations in Washington, D.C. She says the trending stories of 2015 like "The Dress," the llamas and the approval of gay marriage, all had something in common: they were easy to understand.

"The barrier for participation needs to be very low in order for people to join in. So for example, with The Dress, you either fell on one side of it, or the other. You were either a Blue and Black fan, or you were a White and Gold fan. For LoveWins, either you supported the cause, or you didn't support the cause. With the llamas you were either a fan white llama or black llama. And it was very easy to participate and to share, you know, your feelings on it and how you related to the story in general."

Along with the loose Llamas in Arizona, another animal that amused audiences was a rat in the subway of New York City. On most days, a video of a rat would hardly get a re-tweet. But on this day, an observer happened to be there with his phone when a rat was dragging a slice of pizza down a staircase.

The pizza rat video was seen over eight million times on YouTube since September. #PizzaRat suddenly became a social media star. Even Miley Cyrus referenced the PizzaRat in a Saturday Night Live skit.

If you don't remember, the story of Cecil the Lion caught on in July after an American hunter killed the protected lion in Zimbabwe.

But one of the most talked-about "viral" animal moments involved not a real animal, but a person dressed as a shark.

During Perry's song "Teenage Dream," two people dressed as sharks served as "back-up" dancers. The performance started off fine. Both sharks were able to keep their dance moves along with Perry. But as the song progressed, the "left shark" found it harder and harder to keep up. All people could talk about on Twitter after the show was the funny and out-of-sync "left shark."

One of the most important social media story lines in 2015 centered on #BlackLivesMatter. The hashtag called for people to protest the treatment of African-Americans by police and other authority figures.

In 2015, three incidents kept #BlackLivesMatter in the headlines.

In Baltimore, Maryland, residents protested and rioted in April after 25-year-old Freddie Gray died while in police custody.

A couple months later, a white man broke into a predominantly black church in South Carolina and killed nine people during a prayer meeting.

Later in the summer, a black woman named Sandra Bland was arrested in Texas after a traffic stop during which she argued and fought with a police officer. She was later found dead in her jail cell.

Each of these incidents kept #BlackLivesMatter in the national conversation. According to Twitter, it was the eighth-most important trending hashtag of 2015.

Another important social action hashtag this year was #LoveWins. It appeared on both Twitter's trending news and politics lists.

After the U.S. Supreme Court decided to allow marriage between two people of the same sex, President Obama wrote, "Today is a big step in our march toward equality. Gay and lesbian couples now have the right to marry, just like anyone else. #LoveWins."

The message was retweeted and liked almost 1 million times. It became the trending hashtag for the topic of same-sex marriage.

The importance of social media

Tara Hunt is a social media expert. Hunt says people are busier than ever but still want to engage each other on topics like news, sports, music and movies. As a result, people can have an "on-demand" conversation by using these social media sites.

"We, you know, still want to participate with other people of like minds. Right? So what I think the memes – especially around things like The Dress, or the llama drama. Things like that show us that people still want to connect on a broader, in a broader conversation all at the same time. We gather around memes and hashtags and trending topics constantly."

It is not possible to cover all the trending topics from 2015 in one story (did you learn how to dance the Whip and Nae-Nae this year?). Perhaps it is best to leave you with the Facebook and YouTube "year-in-review" videos.

We hope you enjoy them.

And that's What Trended This Year

What was the biggest trending story of the year in your country? We want to hear from you. Write to us in the Comments section or on 51VOA.COM.

engage – v. to get and keep (someone's attention, interest, etc.)

custody – n. the state of being kept in a prison or jail — used after in or into

momentum – n. the strength or force that something has when it is moving

stirred-up – v. to cause (someone) to feel a strong emotion and a desire to do something

meme – n. an idea or behavior that spreads from person to person