Update Required To play the media you will need to either update your browser to a recent version or update your Flash plugin.
By Ashley Thompson
20 May, 2016

In many cities across the United States, May 20 was Bike to Work Day. The day encourages people to try bicycling to work instead of driving or taking a bus or train.

Biking has not always been a popular kind of transportation in the United States. But, in some cities, using a bike to commute is increasingly normal. The League of American Bicyclists' website says that, from 2000 to 2013, the number of people who biked to work regularly in the U.S. grew by 62 percent.

This year, #biketoworkday2016 even trended on Twitter Friday in the United States. 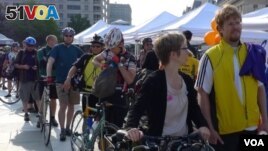 The League of American Bicyclists created National Bike Month in 1956. The month of May was chosen because it usually brings warmer weather. The month-long celebration aims to inspire cyclists and others to "share the road" and make biking more enjoyable and popular in America.

The U.S. Census reported this year that around 1 million people regularly use a bicycle to get to work or school. But not everyone is interested in becoming a bike commuter.

Studies often cite the dangers of biking, especially in large cities with many cars. A 2007 study by the Centers for Disease Control found that you are two times as likely to die on a bike than in a car.

And, many U.S. cities do not yet have many bicycle lanes or bicycle-friendly roads.

Cycling, of course, does have many benefits. It is good for your heath. Research says that three hours of biking a week can reduce a person's risk of heart disease by 50 percent. Cycling is also environmentally friendly. And, it is cheaper than other forms of transportation. On social media Friday, people celebrated the benefits of biking.

Here in Washington, DC, Bike to Work Day is especially important this year. Starting in June, many lines and stations along the district's metro rail system will be closed for long-term repairs. Not being able to use the train has many people wondering how they will get around.

One Twitter user joked that DC's metro system must just be a proud sponsor -- or supporter -- of Bike to Work Day.

Is biking popular in your city or country? Do you bike to work or school? Let us know what you think about #biketoworkday2016!

commuter - n. someone who travels regularly to and from a place and especially between where you live and where you wor?

sponsor - n. a person or organization that pays the cost of an activity or event (such as a radio or television program, sports event, concert, etc.) in return for the right to advertise during the activity or even?