Update Required To play the media you will need to either update your browser to a recent version or update your Flash plugin.
By VOA
01 September, 2016

American Bill Nye is a science educator, actor and writer.

Nye is probably best known as the presenter and star of "Bill Nye the Science Guy," a television program from the 1990s. The show explained science to children in an enjoyable, humorous way. 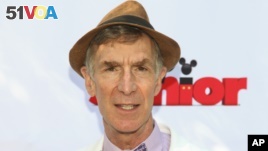 Bill Nye attends the Disney Junior and XPRIZE launch of "Miles from Tomorrowland: Space Missions" at the New York Hall of Science on July 16, 2015, in New York.

One-hundred episodes of "The Science Guy" were shown on Public Broadcasting Service television stations across the United States. Teachers also played videos of the program in classrooms.

Americans who grew up in the 1990s may still recognize and remember the show's opening music.

The U.S. television industry recognized him for his work on the children's show.

Now, almost 20 years after the show ended, Bill Nye is getting a new show. The streaming service Netflix announced this week that it will release "Bill Nye Saves the World" next year.

The new talk show will deal with issues related to science. It will include special guests and scientific demonstrations from Bill Nye himself.

Americans who grew up watching the Science Guy reacted with excitement on social media. Bill Nye trended on Twitter and Facebook.

Another wrote, "@BillNye is going to have a show on Netflix so everything is right in the world again."

Netflix hopes its large audience of millennials -- the young people who watched the children's show -- will now want to see "Bill Nye Saves the World."

The show will be released in the spring of 2017.

episode - n. a television show, radio show, etc., that is one part of a series

guest - n. a usually well-known person who is invited to appear or perform on a program, at an event, etc.