Update Required To play the media you will need to either update your browser to a recent version or update your Flash plugin.
By Ashley Thompson
10 June, 2016

As expected, Republican candidate Donald Trump quickly reacted to the endorsement on Twitter. 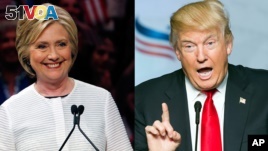 Trump tweeted to his 8.8 million followers: "Obama just endorsed Crooked Hillary. He wants four more years of Obama—but nobody else does!"

Those three words spread quickly on Twitter. In fact, it has become Clinton's most-retweeted message ever, with more than 410,000 retweets. The hashtag #deleteyouraccount trended on Facebook and Twitter.

Many enjoyed her short and simple response to Trump. One Twitter user wrote, "I'm still laughing at Clinton's epic take down of Trump!"

But, others fired back, including Trump himself. He brought up Clinton's use of private email server during her time as Secretary of State.

And the chair of the Republican National Committee Reince Preibus tweeted to Clinton, "if anyone knows how to use a delete key, it's you."

But, others did not appreciate either candidate's tweets. One Facebook user asked, "Why are we accepting this immaturity and pettiness to be the state of American politics?"

Ashley Thompson wrote this report for VOA Learning English. Hai Do was the editor.

endorsement - n. a public or official statement of support or approval

immaturity - n. the act of behaving in a childish ay?

pettiness - n. the quality of being unimportant