Update Required To play the media you will need to either update your browser to a recent version or update your Flash plugin.
By Ashley Thompson
29 April, 2016

The bald eagle is the only "national" animal of the United States.

But that could soon change. 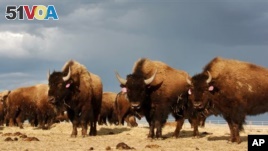 In an April 24, 2012 file photo, a herd of bison are on the Fort Peck Reservation near Poplar, Montana. (AP Photo/Matthew Brown,File)

The U.S. government may soon recognize the bison as the national mammal.

This week, both houses of Congress approved a bill called the "National Bison Legacy Act." The bill would officially recognize the wild animal as the national mammal.

The measure now goes to President Barack Obama. If he signs the bill, it becomes a law.

Bison, also called buffalo, are the largest land animals in North America. They are hairy and have a big head and short horns.

U.S. lawmakers called the bison a sign of American strength.

Senator Martin Heinrich of New Mexico spoke in support of the bill. He said that "recognition of our new national mammal will bring a new source of pride for Americans -- just like the bald eagle" and bring greater attention to protecting the species. Many years ago, bison were almost extinct in North America.

On social people, many people expressed support for the move. They also praised Republican and Democratic lawmakers for being able to agree on something.

But, one reporter joked on social media that choosing the bison as the national mammal was "bad news for humans." Human beings, of course, are also mammals.
Bison already appear on the state flags of Kansas and Wyoming. Bison are also on the official seal of the U.S. Department of the Interior.

Tens of millions of bison once lived throughout an area stretching from central Canada south through the Great Plains and northern Mexico.

After many years of hunting, the population fell to about one thousand or fewer by the late 1800s. Now, there are about 30,000 wild bison. The largest population lives in Yellowstone National Park.

Efforts to give the bison special recognition began about five years ago. Native Americans on the InterTribal Buffalo Council joined with wildlife groups to create a "National Bison Day."

The observance recognizes the importance of the animal's role in providing food, shelter, and clothing for many Native Americans before European settlement.

National Bison Day is held on the first Saturday in November.

Ashley Thompson adapted this report from an Associated Press story. George Grow was the editor.

mammal - n. a type of animal that feeds milk to its young and that usually has hair or fur covering most of its skin

species - n. a group of animals that are similar and can produce young animals

seal - n. an official mark that is stamped on paper or on a small piece of wax to show that something (such as a document) is genuine and has been officially approved

role - n. the part that someone or something has in a family, society, or other group