'How to Move to Canada'

Update Required To play the media you will need to either update your browser to a recent version or update your Flash plugin.
By Ashley Thompson
04 March, 2016

The Google search "How to move to Canada" reached an all-time high this week, right after Super Tuesday in the United States.

On Super Tuesday, 13 states and one territory voted to choose their preferred Republican Party and Democratic Party presidential candidates. It was the most important day yet in the 2016 U.S. presidential campaign. 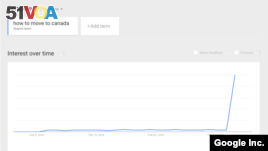 As Trump gets closer and closer to the Republican nomination, it seems, more and more Americans are looking into moving to Canada.

Simon Rogers is a data editor at Google. He tweeted about the sudden search increase. He wrote earlier this week: "Searches for "How can I move to Canada" on Google have spiked 350 percent in the past four hours #SuperTuesday."
But that was only the start of the Google trend. The Google search "How to move to Canada" actually spiked more than 1,000 percent this week.

An official from the Canadian city of Toronto also offered help to Americans looking to move to their neighbor to the north.

Toronto City Councillor Norm Kelly tweeted: "To all my American followers tweeting at me tonight, here's the link." His tweet included a link to the web page "Apply to Immigrate to Canada."

Norm Kelly's post has been re-tweeted more than 46,000 times.

And, a resident of Canada's Cape Breton created the website CBifTrumpwins.com. The island off Canada's east coast is "experiencing a bit of a population problem," as the site says.

The website also says Cape Breton would welcome "all, no matter who you support, be it Democratic, Republican or Donald Trump."

Ashley Thompson wrote this story for Learning English. Hai Do was the editor.

Would you move to another country if a politician you did not like won an election? Write to us in the Comments Section or on 51VOA.COM.

spike - v. to increase greatly in a short period of time

ticket - n. a piece of paper that lets the user see a show, travel on a vehicle or take part in an event