Update Required To play the media you will need to either update your browser to a recent version or update your Flash plugin.
By VOA
03 March, 2016

For the first time, a team of refugees will compete at the Olympic Games. The International Olympic Committee approved a plan this week for a team of up to 10 Refugee Olympic Athletes (ROA).

The news of the Refugee Olympic Athletes became a trending topic on social media Thursday. Facebook users called the plan a "wonderful gesture" and "the greatest news I've heard in awhile."

More than 40 high-performance athletes, who happen to be refugees, have been identified as possible Olympic athletes.

CNN reported Thursday that one of them is a 17-year-old swimmer named Yusra Mardini. She fled Syria on a boat headed for Greece from Turkey. The boat started filling with water. Mardini and her sister got in the water and helped pull the boat and its 20 people on board to safety. 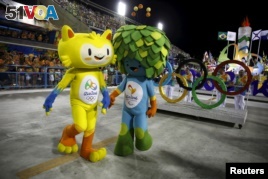 Olympic mascots are seen at the Sambadrome in Rio de Janeiro's Sambadrome, Feb. 7, 2016.

Mardini now lives in Germany. She has received funding from the International Olympic Committee for her training.

The Refugee Olympic team will participate in the Olympic opening ceremony in Rio on August 5. The team will march out just before athletes from Brazil.

International Olympic Committee President Thomas Bach said at an IOC meeting that, "By welcoming this team of refugee athletes to Rio, we want to send a message of hope for all refugees of the world."

The United Nations says that more than 60 million people around the world are refugees.

gesture - n. something said or done to show a particular feeling or attitude