Update Required To play the media you will need to either update your browser to a recent version or update your Flash plugin.
By Ashley Thompson
04 August, 2016

Olympic athletes from around the world are in Brazil to compete in the 2016 Olympic Games. The opening ceremony takes place on Friday in Rio de Janeiro.

Most of the competitors are staying in the newly opened Olympic Village. Some have criticized living conditions within the village. Members of the Australian Olympic team, for example, decided to find somewhere else to stay until repairs were made in their building. 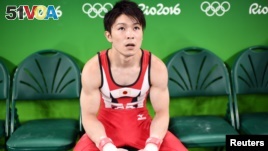 But that has not stopped one Olympian from trying to hunt Pokemon.

Kohei Uchimura is a Japanese gymnast. He is a six-time world champion and the defending Olympic champion in men's gymnastics. His first day of competition at the 2016 Games is on Saturday. He is favored to repeat as the Olympic champion.

But, somehow, he has found time -- a lot of time -- to try to play Pokemon Go since arriving in Rio late last month.

Uchimura recently received a nearly $5,000 telephone bill, Japan's Kyodo news agency reported. A lot of that money is for international roaming charges. This means his phone service did not include data when traveling in other countries.

Thankfully, the AP reported, his phone carrier has agreed to reduce the amount. He will now pay a much-lower fee, of $30, for each day he is in Brazil. Uchimura told Kyodo News that he "really lucked out."

One Twitter user said Uchimura "deserves a medal for talking down" his phone bill.

Ashley Thompson wrote this story. George grow was the editor.

Let us know what you think of this story. Post a message in the Comment Section or on 51VOA.COM.

roaming - n. the use of a cell phone in an area that is outside the usual area and that requires the use of a different network

deserve - v. used to say that someone or something should or should not have or be given something

medal - n. a piece of metal often in the form of a coin with designs and words in honor of a special event, a person, or an achievement