In Yellowstone, Don't Step in the Boiling Water

Update Required To play the media you will need to either update your browser to a recent version or update your Flash plugin.
By VOA
16 June, 2016

This year is the 100th anniversary of the U.S. National Park Service.

Millions of people from across the United States and around the world will spend part of this summer visiting one or more of America's national parks.

One place to enjoy the great outdoors is Yellowstone National Park, in northwestern Wyoming and parts of two other states: Idaho and Montana. 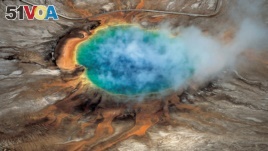 Yellowstone National Park's Grand Prismatic hot springs are among the park's hydrothermal features. They were created by a supervolcano – the largest type of volcano on Earth -- where Yellowstone now sits.

Yellowstone is the country's first national park. It is also one of the most-visited and most-recognized wilderness areas.

Yellowstone has found itself in the news a lot this year -- and not just because of the 100th anniversary.

The park has seen several incidents and accidents involving humans. Many of the events have been reported on social media.

Last month, a visitor to Yellowstone put a baby bison in his car because he thought it looked cold. Park officials later asked wildlife experts to kill the baby bison. They said its mother and other bison rejected the animal because of human contact.

Then, on June 7, a 23-year-old visitor fell into an acidic hot spring after leaving a marked walkway.

This week, another Yellowstone tourist made the park a trending topic on social media. The National Park Service said it fined a Chinese man $1,000 for leaving a boardwalk path in Yellowstone's Mammoth Hot Springs area. A park service press release says the man admitted to trying to collect water in a bottle from the hot springs.

People on social media reacted to yet another incident at the park. Many cheered park rangers for making the tourist pay for breaking rules.

One Twitter user wrote, "Sounds like Yellowstone visitors are pretty unruly. If anything, this Chinese tourist was lucky to be unhurt."

News reports say that the Chinese man also admitted to not reading park safety information before his visit.

Yellowstone does provide visitor information in many languages, including Mandarin and Cantonese.

The National Park Service urges all visitors to "leave no trace" in the protected nature. That includes not leaving the trails and walkways.

trace - n. something (such as a mark or an object) which shows that someone or something was in a particular place