Update Required To play the media you will need to either update your browser to a recent version or update your Flash plugin.
By VOA
18 March, 2016

The American Bald Eagle has long been the national bird of the United States.

In 1782, the Continental Congress approved the Great Seal of the United States. The seal appears on some official U.S. documents. It shows a bald eagle with its powerful wings out-stretched. 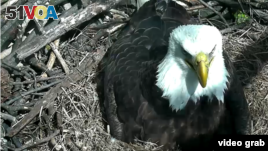 This week, thousands of people have been watching live video of bald eagles breaking open their eggs.

This week, thousands of people have been watching live video of bald eagles breaking open their eggs.

In 2014, two adult eagles built a nest high in the trees of the U.S. National Arboretum in Washington, DC. The nest is 1.5 meters wide and about 1.8 meters deep.

The U.S. Department of Agriculture says this is the first pair of bald eagles to make their home within the arboretum since 1947.

Some people are calling the adult eagles "Mr. President" and "The First Lady." The pair already raised one baby eagle in the same area last year.

Mr. President and The First Lady temporarily left the nest site in the summer of 2015 for their annual migration. A short time later, the non-profit American Eagle Foundation set up cameras in trees near the nest, with the help of tree climbers.

This weekend, people from around the world get to watch as the Bald Eagle pair hope to add more eaglets to their family. "The First Lady" laid the eggs on February 10 and February 14.

On social media, people are using the hashtag #dceaglecam to follow the nest and to guess when they think the eggs will hatch.

But, on the DC Eagle Cam website, the American Eagle Foundation warns that "this is a wild eagle and anything can happen."

wing - n. a part of an animal's body that is used for flying or gliding

migration - n. the movement from one area to another at different times of the year

hatch - v. to be born by coming out of an egg