Update Required To play the media you will need to either update your browser to a recent version or update your Flash plugin.
By Ashley Thompson
09 August, 2016

Lee Eun-ju is a South Korean gymnast. She is representing her country at the Summer Olympics in Rio de Janeiro.

Hong Un-Jong is a North Korean gymnast. She is the 2008 Olympic vault gold medalist. Like Lee, she is the only woman gymnast representing her country at this year's Olympic Games. 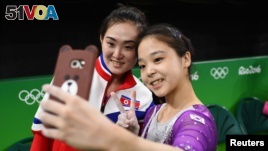 The 17-year-old Lee is seen holding her phone and smiling as 27-year-old Hong leans in for the photo. She is smiling, too.

It was a rare moment of inter-Korean friendship. The photo is being praised for representing the Olympic goals of building peace and understanding between countries.

Yoon Kang-ro is the President of the International Sport Cooperation and Diplomacy Institute in South Korea. He says the Olympics offer the two Koreas a chance to find some common ground.

Yoon said, "One photo doesn't make any good progress, but I think it's a good starting point."

People on social media praised the photo for its impact. Ian Bremmer is a political scientist and founder of the Eurasia Group. He tweeted the photo and wrote, "This is why we do the Olympics."

Twitter user Eugene Cho is a Korean-American. His parents were born in North Korea. He wrote on Twitter that the selfie gave him "hope for a future reunification."

Brian Padden reported this story from Seoul. Ashley Thompson adapted it for Learning English with additional reporting. Hai Do was the editor.

session - n. a period of time that is used to do a particular activity

lean - v. to bend or move from a straight position

common ground - expression. something that people agree about even if they disagree about other things

reunification - n. the process of making something (such as a country) whole again