Update Required To play the media you will need to either update your browser to a recent version or update your Flash plugin.
By VOA
19 January, 2016

Millions of Twitter users were unable to use the social network Tuesday, as the company suffered a major outage worldwide.

Users across Europe, the Middle East, Africa and North America reported having problems. The outages prevented many users on computers and smartphones from sharing and receiving updates and other messages. 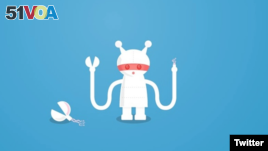 A statement on the company's Twitter page said, "We are aware of the issue and are working towards a resolution."

The on-again, off-again Twitter outages meant that the hashtag #twitterdown trended worldwide, as Twitter remained unavailable in many countries.

Once users were able to access Twitter again, many posted about what they did during the Twitter outage, instead of writing tweets or checking for updates.

One user tweeted: "With #twitterdown, I spent some time with my family. They seem like good people."

outage - n. a period of time when there something (such as electricity) is not working

load - v. to cause (a program, file, etc.) to begin being used or displayed by a computer