Update Required To play the media you will need to either update your browser to a recent version or update your Flash plugin.
By VOA
21 March, 2016

The 140-character messaging service launched in March 21, 2006. Since then, Twitter has become a global communication tool, with 320 million users.

It all began with a simple tweet from Twitter founder Jack Dorsey. On the afternoon of March 21, 2006, he posted, "just setting up my twttr."

Some of the biggest news events in the past 10 years broke first on Twitter. 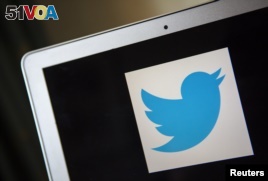 Twitter, the popular social media tool, turned 10-years-old on Monday, March 21. About 320 million people around the world use the Twitter service.

The first report of the U.S. raid that killed Osama Bin Laden came from a Pakistani man's tweet. And the first photo of an American airplane that landed in New York's Hudson River was posted on Twitter.

The pro-democracy Arab Spring protests played out and spread on Twitter. And the #BlackLivesMatter movement gained strength through the social media site.

Today, Twitter users are showing their gratitude for the past 10 years with the hashtag #LoveTwitter.

The idea for a hashtag came more than a year after Twitter's creation. On August 23, 2007, Chris Messina suggested the idea of using the pound (#) symbol to organize tweets.

The hashtag made twitter a more powerful platform for activists and a popular tool for breaking news.

The idea of a retweet function also came from a Twitter user. Eric Rice posted the world's "first" retweet on April 17, 2007.

Twitter users soon began copying tweets with an "RT" at the beginning of the post. Retweeting became a feature on Twitter more than two years later, in November 2009.

The most retweeted post of the past 10 years is comedian Ellen DeGeneres' #OscarSelfie. DeGeneres took the famous selfie during the 2014 Academy Awards. It received more than 2 million retweets.

Twitter may need some more great ideas from its users to survive the next 10 years. Observers are questioning the company's future. Despite its worldwide popularity, Twitter has yet to find a way to make money. It has also been criticized for being slow to control hate speech.

The problems led Twitter's founder, Jack Dorsey, to return to the company.

But Dorsey said earlier this month that the limit would remain.

Do you use Twitter? What do you like best about it? What changes would you make to the site? Let us know in the Comments section!

movement - n. a series of organized activities in which many people work together to do or achieve something

propose - v. to suggest something to a person or group of people to consider

quarter - n. one of four divisions of a year : a period of three months