Update Required To play the media you will need to either update your browser to a recent version or update your Flash plugin.
By VOA
07 October, 2015


The Nobel Prize committee in Stockholm, Sweden has awarded this year's Nobel Prize in Chemistry.

"The Royal Swedish Academy of Sciences has decided to award the 2015 Nobel Prize in Chemistry jointly to Tomas Lindahl, Paul Modrich and Aziz Sancar..."

The three award winners received the prize for their work in human DNA repair. Their work has provided knowledge on how living cells are used in developing new cancer treatments.

Nobel Prizes are awarded each year in medicine, physics, chemistry, literature, and peace. The money comes from a bequest by Swedish inventor Alfred Nobel. The awards have existed since 1901 and have become a top award in each field. 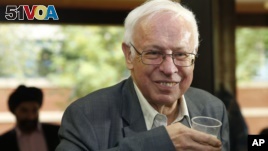 Sweden's Tomas Lindahl, one of the joint winners of the 2015 Nobel Prize for Chemistry, has a drink of champagne at the Francis Crick Institute in Potters Bar, north London, England, Wednesday, Oct. 7, 2015. Sweden's Tomas Lindahl, American Paul Modrich and U.S.-Turkish scientist Aziz Sancar won the Nobel Prize in chemistry on Wednesday for "mechanistic studies of DNA repair. (AP Photo/Alastair Grant)

The secretary general of the Royal Swedish Academy of Sciences made the announcement Wednesday.

Jonathan Evans adapted this story for Learning English. Kathleen Struck was the editor.

bequest – n. the property or money that you promise in your will to give to another person or organization after you die