Update Required To play the media you will need to either update your browser to a recent version or update your Flash plugin.
By Jim Dresbach
12 March, 2016

The day started with a ceremony on the South Lawn of the White House. The two leaders traded compliments and jokes comfortably. Canada and the U.S. are strong allies, and the exchange between Obama and Trudeau showed that.

Obama told the audience that America and Canada share many customs and ideals. He cited anti-terrorism, universal health care, freedom of religion, and a love for ice hockey. 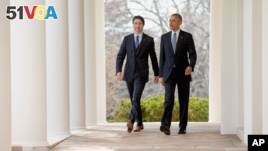 President Barack Obama and Canadian Prime Minister Justin Trudeau walks through the colonnade to speak at a bilateral news conference in the Rose Garden of the White House in Washington, Thursday, March 10, 2016. (AP Photo/Andrew Harnik)

"The United States and Canada are blessed to be neighbors. By choice, we are steadfast allies and the closest of friends," Obama said at the welcoming ceremony.

Trudeau, who is 44, campaigned in Canada last autumn on a message of hope and change. His political style is like Obama's. While Trudeau joked with the president that Canada's best exports to the U.S. are ice hockey players, he was serious about the bond between the nations.

"The relationship between our two countries has always been vital," Trudeau said. "We remain united in a common purpose."

Both leaders are also fighting climate change. Both leaders plan on putting the international climate control pact into practice.

It ended with a state dinner at the White House. The media gushed about Trudeau and his wife, Sophie Gregoire-Trudeau, and their personal style.

It was the 10th state dinner the Obamas have hosted. The state dinner for Trudeau and his wife, Sophie was the first for a Canadian head of government since 1997.

lawn – n. an area of ground, such as the ground around a house or in a garden or park, that is covered with short grass

ice hockey – n. a game played on ice rink in which two teams try to shoot a puck into the opponent's goal

steadfast – adj. very loyal to a person, belief or cause

permafrost – n. a layer of soil that is always frozen in very cold areas

glacier – n. a very large area of ice that moves slowly over a wide area of land