Update Required To play the media you will need to either update your browser to a recent version or update your Flash plugin.
By Susan Shand
11 November, 2017


In Somalia this past September, Turkey opened its first military base on the African continent. Over the past ten years, Turkey has expanded its presence in Africa, establishing 36 embassies and major trade links.

Turkey has a long history with North African countries, says David Shinn, a professor at George Washington University's Elliot School of International Affairs. In 2016, Turkey had more than $10 billion in trade with Egypt, Algeria and Morocco.

Now Turkey is expanding into African countries below the Sahara Desert. A Turkish company is building a multi-billion dollar railroad across Ethiopia and Tanzania. The state-owned Turkish Airlines flies to more than 50 African cities. 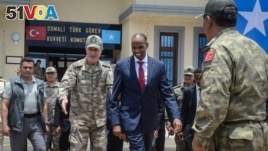 Most of Turkey's ties to Africa are about business, says Shinn, who believes Turkey wants to invest in private African companies and expand its exports.

Turkish President Recep Tayyip Erdogan has made Africa an important part of his foreign policy.

In a statement published by Al-Jazeera last year, Erdogan wrote, "Many people in the world associate the African continent with extreme poverty, violent conflict and a general state of hopelessness. The people of Turkey have a different view.

Shinn says the new Turkish military base in Somalia is a display of power and helps to strengthen strategic alliances.

Turkey's presence in Somalia goes back to the Ottoman Empire, when Turkey built small communities along the Somali coast. But, its recent interest is linked to politics as well as economics.

Somalia is a mostly Muslim nation, like Turkey, and Erdogan thinks a partnership could be helpful to both countries. Turkey can help Somalia as it struggles with food insecurity, drought, and terrorism.

On October 14, more than 300 people died from a car bomb explosion in Mogadishu, Somalia's capital. It was the country's worst terrorist attack in 20 years.

Turkey helped immediately. It flew wounded people to a Turkish hospital in Ankara. Turkey condemned the attack and offered Somalia support and solidarity.

"Turkey's help and support will be written in our history books and we will never forget that," Khaire said at a news conference.

Turkey plans to train as soldiers thousands of Somalis at the new military base just south of Mogadishu. The soldiers will replace AMISOM, the international peacekeeping force now in Somalia. It is to withdraw over the next three years.

AMISOM is helping Somalia fight the terrorist group al-Shabab, suspected of the October bomb attack. Al-Shabab calls AMISOM an army of "foreign invaders." Many of the troops are Christians from other African nations.

Serhat Orakci is an Africa expert with the IHH Humanitarian Relief Foundation. He told VOA that the newly trained Somali soldiers could help fight al-Shabab.

The presence of Turks may be more acceptable in Somalia since they are Muslims.

Since 2015, Erdogan has visited Ethiopia, Djibouti, Somalia, Kenya and Uganda. He also traveled to Tanzania, Mozambique and Madagascar. In each country, he requested that Gulen schools close. Gulen Schools are Islamic schools named after Fethullah Gulen, a clergy leader with many international followers. Years ago, Gulen chose to leave Turkey and live in the United States.

Erdogan says Gulen was the leader of a violent overthrow attempt in Turkey in 2016. Gulen denies the accusation. More than 250 people died during the violence.

At least six governments in Africa have agreed to close the schools although they are popular.

Shinn thinks it unlikely that Turkey will continue to expand in Africa when Erdogan leaves office. He added that Turkey's economy will have to remain strong to continue its presence in Africa.

strategic - adj. of or relating to a general plan that is created to achieve a goal in war, politics, etc