Update Required To play the media you will need to either update your browser to a recent version or update your Flash plugin.
By Phil Dierking
21 September, 2018


The government of U.S. President Donald Trump announced this week that it plans to limit the number of refugee arrivals in the U.S. to a record low number. But refugee activists and lawmakers say Congress still has time to change the president's mind.

On Monday, Secretary of State Mike Pompeo spoke to reporters about the plan. He claimed that refugees can be a security threat to the United States. In answer, he said, the executive branch is proposing a limit of "up to 30,000 refugees" in the fiscal year that begins October 1. If approved, the number would be the lowest since the early 1980s.

Before the president makes the final decision, however, lawmakers in Congress must be able to give their advice. 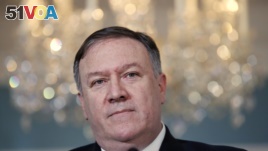 Secretary of State Mike Pompeo speaks about refugees as he makes a statement to the media, Sept. 17, 2018, at the State Department in Washington.

Jen Smyers is with the Church World Service, one of the leading refugee resettlement groups in the United States. She says government officials often suggest a number before the final decision is made. And, she says, Congress has succeeded before in increasing the planned number of refugee arrivals.

But, she added on a telephone call with reporters, "the timeline is tight." The final decision will be made by the end of this month.

During Trump's first year in office, his government set the limit at 45,000 refugees. However, with less than two weeks remaining in the fiscal year, less than half of that amount has been reached.

Philemon Dushimire is a refugee from Burundi who now lives in Maine. There, he is a community organizer among the Burundi immigrant and refugee community. He told VOA that the decrease in the refugee limit may affect how the United States is viewed abroad.

Some lawmakers from both major parties have criticized the proposed refugee limit.

Democratic Senator Ed Markey of Massachusetts accused the Trump government of trying to isolate America and not caring about people suffering around the world.

Representative Ileana Ros-Lehtinen, a Republican from the Miami area, also answered on social media. She is a political refugee herself.

"With crises in every region of the world, U.S. should be doing more, not less, to be a global leader in refugee protection," she tweeted shortly after Pompeo's announcement on Monday.

This story was originally reported by Victoria Macchi and Patrick Nduwimana for VOANews. Phil Dierking adapted this story for VOA Learning English. Kelly Jean Kelly was the editor.

fiscal - adj. of or relating to money and especially to the money a government, business, or organization earns, spends, and owes

isolate - v. to put or keep (someone or something) in a place or situation that is separate from others

resettle - v. to begin to live in a new area after leaving an old one

slash - v. to make a long cut in (something) with a knife or other sharp weapon

stakeholder - n. a person or business that has invested money in something (such as a company)