Update Required To play the media you will need to either update your browser to a recent version or update your Flash plugin.
By Susan Shand
07 December, 2018


United States President Donald Trump announced Friday that he will nominate former attorney general William Barr to lead the Justice Department. Trump told reporters that Barr was "my first choice since day one."

Barr held the same position from 1991 to 1993 under former President George H.W. Bush.

Trump also said he would nominate Heather Nauert as U.S. Ambassador to the United Nations. Nauert is the current State Department spokeswoman. She also is acting undersecretary of state for public diplomacy and public affairs.

Barr confirmed that he had accepted the president's nomination. He is currently a business lawyer. Barr will replace acting Attorney General Matthew Whitaker who was appointed last month after Jeff Sessions resigned. 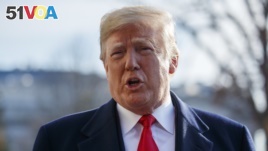 President Donald Trump announces that he is nominating William Barr, attorney general under President George H.W. Bush, as his Attorney General, on the South Lawn of the White House, Friday, Dec. 7, 2018, in Washington. (AP Photo/Evan Vucci)

Both the attorney general and U.N. ambassador positions require Senate confirmation. Trump said he hopes the process would be completed quickly, but Congress closes for its winter break in one week. The newly-elected Senate is seated on January 3.

Barr will have to answer questions at his confirmation hearing about the special counsel investigation into Russian influence in the 2016 presidential election. That investigation is being led by Robert S. Mueller III.

Democratic Sen. Richard Blumenthal serves on the Judiciary Committee that will question Barr. He said in a statement that he would "demand that Mr. Barr make a firm...commitment to protect the Mueller investigation, operate independently of the White House, and uphold the law."

The investigation, and the Justice Department's supervision of it, have angered the President.

Trump dismissed his former attorney general, Jeff Sessions, partly because Sessions had removed himself from the investigation.

Trump renewed his attacks on Friday, tweeting that he planned to do "a major Counter Report to the Mueller Report."

"This should never again be allowed to happen to a future President of the United States!" Trump wrote.

The Mueller investigation appears to be nearing its end.

The Trump administration expects that Barr's nomination will be well-received by Republicans, who respect his experience. Officials also hope Democrats might consider Barr a traditional republican with no personal ties to the president.

Nauert joined the State Department in 2017 after working as a TV reporter for Fox News. The 48-year-old spokesperson would replace U.N. Ambassador Nikki Haley, who announced she was leaving the position at the end of the year.

Nauert would be responsible for voicing the administration's foreign policy positions to diplomats at the U.N.

Among those are continued support for Israel and for economic sanctions against North Korea and Iran.

If she accepts the position, Nauert will most likely face difficult questions from the Senate about her lack of experience as a diplomat.

talented –adj. having a special ability to do something well

commitment –n. a promise to do something

counter – adj. something in defense or in response to something

allow –v. to permit
sanctions – n. an action that is taken or an order that is given to force a country to obey international laws by limiting or stopping trade with that country, by not allowing economic aid for that country