Update Required To play the media you will need to either update your browser to a recent version or update your Flash plugin.
By Caty Weaver
04 May, 2016

The Texas senator was Trump's closest competitor. He announced he was suspending his campaign after losing the Indiana primary Tuesday. Donald Trump defeated Cruz and Ohio Governor John Kasich by a huge amount in that contest.

Cruz thanked his family and his supporters in Indianapolis. But he said that his "path toward victory has been foreclosed," and that "voters have chosen another path."

On Twitter, the chairman of the Republican Party confirmed Trump as the presumptive nominee and called for unity to defeat Hillary Clinton. 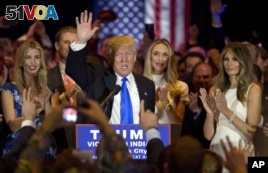 Donald Trump echoed that idea in his victory speech from New York City. He praised Cruz' decision to leave the race. "It was a brave thing to do, he said, "because we need unity in the Republican Party."

He also called Cruz a "tough, smart competitor" and said he has an "amazing future."

On the Democratic Party side, Bernie Sanders defeated Hillary Clinton in Indiana. The competition in that contest was much closer.

The U.S. presidential election will be held November 8.

Caty Weaver wrote this story for VOA Learning English. ­­­Hai Do was the editor.

We want to hear from you. Write to us in the Comments Section. You can also post a message on 51VOA.COM.