Trump Is a Big Issue in US Congressional Elections

Update Required To play the media you will need to either update your browser to a recent version or update your Flash plugin.
By Bruce Alpert
21 October, 2016


Republican Party candidates for seats in Congress must decide what to do about Donald Trump.

Trump, the Republican candidate for president, has many loyal supporters. They crowd into his campaign events and cheer his promises to make America great again.

But the popularity of the businessman has been dropping in opinion polls ever since the release of an 11-year-old recording. On the recording, Trump could be heard talking about touching and kissing women without their permission.

Trump has said the recordings are embarrassing. He has apologized. He denied doing the kind of things he talked about on the recording.

Some women have come forward to say that Trump had made unwanted sexual advances years ago. He said their claims are not true.

"Those stories are all totally false, I have to say that," Trump said, at the presidential debate in Nevada on Wednesday. "And I didn't even apologize to my wife, who's sitting right here, because I didn't do anything."

Difficult Decisions for Some Candidates

All the news reports about the Trump recording left some Republican congressional candidates with difficult decisions.

Republican John McCain has represented the southwestern state of Arizona in the United States Senate since 1987. He is seeking a sixth Senate term against Ann Kirkpatrick, a Democrat. 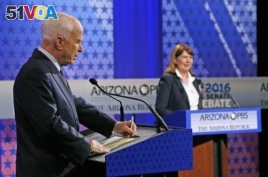 McCain recently said that he will not vote for either Trump or Hillary Clinton, the Democrats' candidate for president.

"I have wanted to support the candidate our party nominated," McCain said. But he said Trump's "comments about women and his boasts about sexual assaults, make it impossible to continue to offer even conditional support for his candidacy."

Congressman Todd Young of Indiana, a Republican, is a candidate for a U.S. Senate seat. Young is backing Trump, just as he says "most Hoosiers are."

A Hoosier is the informal name for someone who lives in Indiana.

"My position is the same as their position," Young told The Washington Post newspaper. "Most Hoosiers intend to support the Republican nominees. Most Hoosiers believe leaders like myself should speak out when we disagree."

Most Republican candidates for Congress are doing what Young is -- supporting Trump, while offering criticism of some of his comments and proposals.

Congressional Elections Are a Big Deal

The congressional elections are important. The newly elected president would have a better chance of getting his or her proposals through Congress if their party holds the majority.

Pat Toomey of Pennsylvania is seeking re-election to the U.S. Senate. Toomey is the only Republican in a difficult race who has refused to say if he will vote for Trump, according to Reuters. He has called Trump's recorded comments on women "outrageous."

Toomey told Pennsylvania voters he will serve as a "check" on Hillary Clinton's nominations to the Supreme Court. If Trump wins, Toomey said, he might help win Senate approval of his court nominations.

Larry Sabato is the director of the Center of Politics at the University of Virginia. He said Toomey and other Republicans in difficult races are making the case that they can serve as check on Clinton. They hope to stop or limit her proposals. Sabato calls that argument "one of the only good ones" some Republican congressional members have.

Brian Brox teaches political science at Tulane University in New Orleans, Louisiana. He said that the 2016 congressional elections are hard to understand, even for the candidates.

Brox said that is because it is difficult to say who will show up and vote on Election Day. For Republican members of Congress, the question is whether some of the party's long-time supporters might stay home because they do not like Trump, he said.

Also, will more Democrats worried about a Trump presidency show up to vote?, Brox wonders. Or will young voters, who supported Barack Obama, stay home because they wanted Vermont Senator Bernie Sanders as president?

Sanders lost the battle for the Democratic presidential nomination to Clinton.

Kevin Arceneaux teaches political science at Temple University in Philadelphia, Pennsylvania. Here is what he expects from many Republican congressional candidates:

"Distance yourself from Trump, while trying to make the race about stopping Clinton's agenda -- for example, reminding GOP and GOP-leaning voters that they do not like Clinton. Whether this works, only time will tell," Arceneaux said.

Michael Bowman reported this story for VOA News. Bruce Alpert adapted this story and did additional reporting for Learning English. George Grow was the editor.

boast - n. to express too much pride in yourself or in something you have, have done, or are connected to in some way

intend - v. to plan or want to do something

outrageous - adj. very bad or wrong in a way that causes anger

agenda - n. a list of things to be considered or done

remind - v. to cause someone to remember something

leaning - n. a preference for something or tendency to do something