Update Required To play the media you will need to either update your browser to a recent version or update your Flash plugin.
By VOA
02 March, 2016


March 1 was Super Tuesday, but March 15 will be key for candidates against Donald Trump for the Republican presidential nomination.

Trump and Democrat Hillary Clinton strengthened their control of their parties' presidential race after big wins on Super Tuesday. But 16 more states and territories will hold primary elections or caucuses in the next two weeks. That includes the two large states of Florida and Ohio.

Republican Governor John Kasich of Ohio and Florida Senator Marco Rubio are looking to win the primaries in their home states. Both Kasich and Rubio have finished well behind businessman Trump and Texas Senator Ted Cruz in almost all of the nominating elections. Political experts say their candidacies may not survive a loss at home. 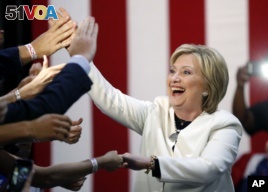 On the Democratic side, former Secretary of State Clinton is heading into Michigan with a lead over Senator Bernie Sanders of Maine. The two are scheduled to debate Sunday in Flint. The city is dealing with a drinking water crisis. High lead levels were discovered in city drinking-water and residents.

With the victories, Clinton now has over 1,000 delegates. That is nearly three times larger than the 373 delegates for Sanders.

On the Republican side, Trump took Alabama, Arkansas, Georgia, Massachusetts, Tennessee, Virginia and Vermont. Senator Ted Cruz took his home state of Texas, as well as Oklahoma and Alaska. Florida Senator Marco Rubio picked up his first win of the primary season in Minnesota.

With the victories, Trump has 316 delegates and Ted Cruz has 226.

What the big winners said

"America never stopped being great," Clinton said at a rally in Florida, referencing Trump's campaign slogan. "We have to make America whole," she said, adding that the rhetoric on the Republican side "has never been lower."

Trump also spoke of his rival, Rubio, whom he has clashed with fiercely over the past week. "I know it was a very rough night for Marco Rubio. He worked hard, he spent a lot of money. He is a lightweight, like I have said many times," Trump said.

"Rubio was the big loser of the night," he added.

"This campaign, as I think all of you know, is not just about electing a president, it is about transforming America. It is about making our great nation the country we know it has the potential to be."