Update Required To play the media you will need to either update your browser to a recent version or update your Flash plugin.
By Dan Friedell
31 May, 2017

Donald Trump sent out one of his most popular tweets as president just after midnight on Wednesday. It was not about jobs or "fake news."

It was about "constant negative press covfefe."

It was retweeted and liked hundreds of thousands of times before he deleted it around 6:00 in the morning.

Suddenly, social media was filled with people wondering how to pronounce the word. And others tried to figure out what it meant. 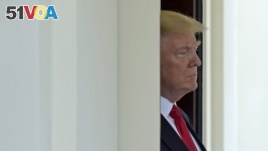 Some people thought President Trump was in the middle of writing a message and sent it by accident.

Later on Wednesday morning, Trump wrote: "Who can figure out the true meaning of "covfefe"??? Enjoy!"

Based on the context, many thought it should have been "coverage," instead of "covfefe."

But that did not stop people from teasing Trump about the tweet.

The New York Times opinion writer Charles M. Blow wrote: "And just before you serve it, you hit it with a dash of #Covfefe."

Blow included a video that appears to show Trump adding a dash of salt to food.

Other people thought "covfefe" might be a good replacement for product names. One person wrote "Don't talk to me before my morning ‘covfefe.'"

Late-night television host Jimmy Kimmel, a comedian who writes jokes for a living, was sad about "covfefe." He wrote: "I'll never write anything funnier than #covfefe."

Some people replaced words from famous songs with the new word "covfefe."

Others created new Twitter profiles with the word "covfefe," including those of a fictional wizard and warrior. The two got into a Twitter battle with each other, each saying they were the ones "summoned" by Trump's tweet.

What do you think "covfefe" means? We want to know. Write to us in the Comments Section or on 51VOA.COM.

figure out – v. to understand or find (something, such as a reason or a solution) by thinking

context – n. the words that are used with a certain word or phrase and that help to explain its meaning

dash – n. a small amount of something that is added to something else — usually singular

comedian – n. a person who performs in front of an audience and makes people laugh by telling jokes or funny stories or by acting in a way that is funny : an actor who plays roles that make people laugh

summon – v. to order (someone) to come to a place