Update Required To play the media you will need to either update your browser to a recent version or update your Flash plugin.
By Mario Ritter
01 May, 2018


U.S. President Donald has extended a period in which some countries will not pay import taxes, or tariffs, on some products.

His administration says it is giving trade negotiators 30 more days to work out a deal. The exemptions were to have ended on Tuesday May 1.

The tariffs have already been put into effect on China and Russia. But the European Union (EU), Canada and Mexico received exemptions from tariffs on their aluminum and steel exports to the U.S. 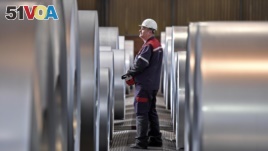 A worker stands among steel coil in a steel factory in Duisburg, Germany. The European Union criticized a recent move by the Trump Administration to delay tariffs on steel and aluminum products. (AP Photo/Martin Meissner)

The European Commission criticized the temporary extension in a statement Tuesday. The group said the EU has been willing to discuss the issue and "will not negotiate under threat."

The commission said, "The U.S. decision prolongs market uncertainty, which is already affecting business decisions." It added that the tariffs, which are meant to protect U.S. industry, cannot be justified by national security concerns.

German Chancellor Angela Merkel spoke to Trump last week during a visit to the White House. She warned that trade relations between the allies could worsen if the EU does not receive a permanent exemption.

On Monday, Canadian Prime Minister Justin Trudeau warned against placing tariffs on his country's steel and aluminum. He said such measures could hurt the U.S. car and aerospace industries, which depend on imported materials.

Late Monday, the U.S. announced that it had reached a final deal with South Korea, which will receive a permanent exemption from the tariffs. It said that early agreements had been reached with Argentina, Australia and Brazil.

The Trump administration has said that some countries sell their steel and aluminum at unfairly low prices. And President Donald Trump has said this competition hurts U.S. industries that are important to national security.

Lee, Schwartz, Hannas reported this story for VOA News. Mario Ritter adapted it for VOA Learning English. Hai Do was the editor.

exemption –n. freedom from having to do what others are required to do

prolong –v. to cause something to continue for a longer time

uncertainty–n. the quality or state of being unsure

justified –adj. providing a good reason that something should be done or is right