Trump Leads in Iowa, Bloomberg May Join the Race

Update Required To play the media you will need to either update your browser to a recent version or update your Flash plugin.
By Bruce Alpert
28 January, 2016


For nearly a year, candidates have been telling American voters that they are best qualified to become the next U.S. president. On Monday, voters will have their say in an evening of discussion and debate known as the Iowa caucus.

Monday's caucus in the Midwestern state of Iowa is the first in a series of caucuses and primaries to select a nominee for the Republican and Democratic parties.

In the Republican presidential field, businessman Donald Trump expands his lead over the crowded field of candidates. 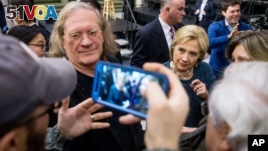 Democratic presidential candidate Hillary Clinton takes a question from a member of the audience after speaking at a rally at the University of Northern Iowa in Cedar Falls, Iowa, Jan. 26, 2016. (AP Photo/Andrew Harnik)

A Fox News poll in Iowa shows Trump leading 23 to 34 percent above Senator Ted Cruz of Texas. Another poll by CBS News has Trump with a smaller lead over Cruz in Iowa -- 34 to 39 percent. Senator Marco Rubio of Florida is in third place in both polls.

Nationally, support for Trump is also increasing, according to a new CNN poll on Tuesday. It shows Trump with the support of 41 percent of Republican voters across the United States. Cruz is in second place with 19 percent.

On the Democratic side, former Secretary of State Hillary Clinton and Senator Bernie Sanders of Vermont are in a virtual tie among Iowa voters. The CBS poll of Iowa voters shows Clinton leading 46 to 47 percent. But Clinton still has a large lead over Sanders nationally in the new CNN poll. Her lead is 38 percent to 52 percent.

As a candidate, Trump has called for deporting undocumented immigrants and for banning Muslims from entering the U.S. On the opposite side, Sanders has called for breaking up large financial institutions. He also wants free college tuition at public colleges.

Rival candidates have called their proposals as unrealistic and "not serious." But Trump, on the Republican side, and Sanders, on the Democratic side, continue to gain strength among primary voters.

"There seems to be an extraordinary amount of anger in the United States, both on the left and on the right and maybe even in the center and it's a little disconcerting," said political analyst Stan Collender. "I don't think anyone saw this coming or anyone predicted it."

Will Bloomberg enter the race?

Over the weekend, The New York Times reported that former New York City Mayor Michael Bloomberg is considering a run for president as an independent. 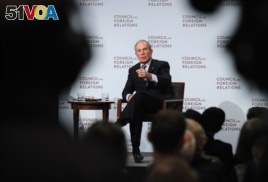 Former New York mayor Michael Bloomberg is considering an independent big for the presidency, according to close associates who are familiar with his decision making.

The paper reported that Bloomberg would run if Bernie Sanders and Donald Trump were the Democratic and Republican nominees.

Bloomberg, a billionaire like Trump, was mayor of New York City for 12 years. Since he has left office, Bloomberg has spent much of his own money calling for tougher gun control laws.

The threat of another billionaire in the race brought quick response from the candidates. On NBC's Meet the Press, Clinton said, "Well, I'm going to relieve him of that and get the nomination so he doesn't have to."

Sanders' candidacy is largely a promise to reduce big wage differences between wealthy and poor Americans.

"If Donald Trump wins and Mr. Bloomberg gets in, you're going to have two multi-billionaires running for president of the United States against me," Sanders said on Meet the Press. He said Americans do not want to see "billionaires control the political process."

Even President Barack Obama felt the need to say something about the race.

In an interview this week with Politico, Obama described Clinton as "wicked smart," and "extraordinarily experienced."

He also praised Sanders, but not as much, according to Politico. Obama said Sanders gets the benefit of being a new candidate for president. Clinton also ran in 2008, when she lost the Democratic presidential nomination to Obama.

"You're always looking at the bright, shiny object that people haven't seen before — that's a disadvantage to her (meaning Clinton)," Obama said.

But he had nothing good to say about Trump and Cruz, the two leading Republican candidates.

VOA's Jim Malone reported on this story. Bruce Alpert adapted his report for Learning English. Hai Do was the editor.

qualified – v. having the necessary skill, experience, or knowledge to do a particular job or activity

virtual – adj. very close to being something without actually being it

deport – v. to force a person who is not a citizen to leave a country

extraordinary – adv. very different from what is normal or ordinary

disconcerting – adj. cause for concern

billionaire – n. a rich person who has at least a billion dollars

relieve – v., to reduce or remove something

replace – v. to be used instead of something

vision – n. what conditions a candidate or person wants in the future