Update Required To play the media you will need to either update your browser to a recent version or update your Flash plugin.
By George Grow
30 June, 2017


President Donald Trump says the United States can no longer be patient with North Korea.

"The era of strategic patience with the North Korean regime has failed," the U.S. leader said. "Many years and it's failed, and frankly, that patience is over."

Trump was speaking about the U.S. government's policy for dealing with North Korea during the presidency of Barack Obama. The Obama administration chose to isolate North Korea while increasing sanctions as a way of forcing it to return to disarmament talks. 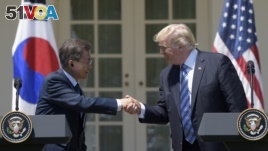 Yet the North Korean government has continued to carry out nuclear and missile tests. The country's leadership sees the programs as important to their survival.

On Friday, President Trump promised what he called a "determined response" against North Korea's nuclear and missile programs.

Trump and Moon differ over exactly how much to pressure the North into giving up its weapons programs. Both leaders also have criticized parts of defense cooperation between their countries.

But on Friday the two men presented a united front.

Moon said they were able to agree on a series of issues, from defense ties to the North Korean nuclear program.

"The North Korean nuclear issue must be resolved without fail," he added.

The meeting was the first between Trump and Moon, a liberal human rights lawyer who took office last month. The talks were closely watched, not only because of the personality differences between the two men, but also for possible areas of disagreement.

During the 2016 election campaign, presidential candidate Trump criticized South Korean trade policies. He also said that South Korea and other U.S. allies are not paying enough for defense protection from U.S. forces.

On Friday, Trump told Moon that the U.S. "will always defend our allies." But he added that there needs to be "fair burden-sharing in South Korea."

On trade, Trump said the existing trade agreement between the countries has been difficult for the U.S. He added that he is working to create a fair economic relationship with South Korea.

Since the current trade deal went into effect in 2012, the U.S. trade deficit with Seoul has doubled. "Not exactly a great deal," Trump said on Friday.

William Gallo wrote this story for VOANews. George Grow adapted his report for Learning English. Hai Do was the editor.

strategic – adj. useful or important in executing a plan

regime – n. a government in power

isolate – v. to set apart or separate from others

sanction – n. an action taken by one or more nations to make another country obey a rule

response – n. an answer or reaction