Update Required To play the media you will need to either update your browser to a recent version or update your Flash plugin.
By Caty Weaver
06 September, 2018


Top Trump administration officials say they are not the writer of a New York Times opinion piece sharply critical of President Donald Trump.

Secretary of State Mike Pompeo spoke on the issue during his visit to India. He called the opinion piece "sad." He criticized the media for what he said were its efforts to "undermine this administration."

The director of national intelligence, Dan Coats, released a statement denying that he or his top deputy wrote the piece. 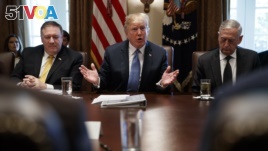 The Times said the writer is a senior administration official whose job would be at risk if the person's identity were to be made public.

The opinion piece says that Trump's staff often takes action to block the president from action.

The writer of the piece says he or she wants Americans to know that "there are adults in the room."

The writer describes the president as "impetuous, adversarial, petty and ineffective."

Trump has spoken and written about the piece several times since its publication Wednesday. In one tweet, he demanded that the newspaper name the source for legal action.

Trump wrote, "Does the so-called 'Senior Administration Official' really exist, or is it just the Failing New York Times with another phony source? If the GUTLESS anonymous person does indeed exist, the Times must, for National Security purposes, turn him/her over to government at once!"

The demand came shortly after Trump published a one-word message on Twitter: "TREASON?"

Trump was asked about the piece on Wednesday following an event at the White House. He called it "gutless" and launched into an extended criticism of the newspaper.

"They don't like Donald Trump and I don't like them because they're very dishonest people," the president told reporters.

Trump described the writer of the opinion piece as someone "probably who is failing and probably here for all the wrong reasons."

The piece says administration officials have discussed the possible use of the 25th Amendment. That measure defines methods to legally remove a president from office.

However, the writer says no one wants to cause a constitutional crisis. The piece reports, "So we will do what we can to steer the administration in the right direction until — one way or another — it's over."

White House Press Secretary Sarah Huckabee Sanders released a statement in which she described the piece as "a new low for the so-called paper of record.'"

Sanders said The Times should apologize. She called the story's publication "another example of the liberal media's concerted effort to discredit the President."

The press secretary accused the writer of "not putting country first, but putting himself and his ego ahead of the will of the American people." She said the writer should resign from the administration.

The opinion piece in The New York Times is similar to parts of a new book about Trump by reporter Bob Woodward. Short parts of Fear: Trump in the White House were published Tuesday in The Washington Post. The book is set for release next Tuesday.

Steve Herman reported this story for VOA News. Caty Weaver adapted it for Learning English. was the editor.

adversarial - adj. involving two people or two sides who oppose each other

amateur - adj. a person who is not skillful at a job or other activity

anonymous - adj. not named or identified

concerted - adj. done in a planned and deliberate way usually by several or many people

ego - n. the opinion that you have about yourself

fiction - n. written stories about people and events that are not real

impetuous - adj. acting or done quickly and without thought

steer - v. to control the direction in which something moves