Trump Popular with Supporters, But Others Oppose Him

Update Required To play the media you will need to either update your browser to a recent version or update your Flash plugin.
By Bruce Alpert
25 February, 2017

But the new president has low approval ratings among Democratic Party supporters and independent voters.

After a month in office, Trump, a Republican, leads a nation that remains divided on many issues after a divisive election. He defeated Hillary Clinton, the Democratic candidate for president, in November. He replaced Barack Obama, another Democrat, as president on January 20.

Trump's supporters say he is doing what they hoped he would when they voted for him. But others, mainly Democrats and independents, disapprove of the immigration and environmental policies his supporters praise.

Trump may have his best chance of his early presidency to appeal to people other than his supporters when he speaks to Congress on Tuesday.

Trump's spokesman, Sean Spicer, said the president will talk about his busy and productive start of his presidency. But Spicer said he will also talk about his efforts "to be a president that brings people together, that unites them."

Public approval ratings for the president range from 38 percent to 52 percent, based on recent opinion surveys. The average ratings show 44 percent of Americans approve of the job Trump is doing and 50 percent disapprove, according to RealClearPolitics.com

Trump has had a busy first month as president.

He has launched a new effort to remove undocumented immigrants from the United States. He ordered a travel ban aimed at people from seven Muslim majority nations.

Trump is moving to reduce federal rules of the environment and banking industry. He also wants to repeal and replace a national health care program, known as Obamacare.

The travel ban is now on a court-ordered hold. And efforts to repeal Obamacare have been slowed by disputes among Republicans on how to replace it and growing support for the health law, according to recent polls. 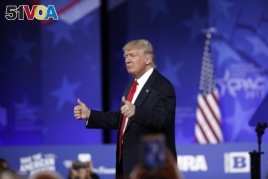 Trump has been active on Twitter, attacking news stories critical of his administration and those protesting his policies.

On Twitter, Trump called some media organizations the "enemy of the American People." He said "classified information" is being given to the news media "like candy." He also tweeted that if there is a terrorist attack on America, the blame goes to the judge who suspended enforcement of his travel ban.

John Feehery is a Republican political adviser. He said that Trump's strongest supporters during the 2016 election campaign are very happy with what he is doing. "He has basically been taking the status quo and throwing it on the ground and smashing it up," Feehery said.

But there are danger signs, with record low approval ratings so early in his presidency.

While Feehery said it is good that Trump enjoys strong support from his political base, he needs to expand that support.

"He's got to figure out, ‘OK, how do I do things that make the rest of the country comfortable in my leadership,'" Feehery said.

Doing what he promised

Gene Humber is a Trump supporter. He was called on to speak during a recent Trump event in Florida.

John Bonifaz is president of a group called Free Speech for People. He recently gave a petition to Maryland Congressman Jamie Raskin, a Democrat. The document called on Congress to remove Trump from office.

Bonifaz said the president is not following the rule of law or the U.S. Constitution.

With Republicans in control of both houses of Congress, removal efforts appear unlikely to succeed. But Democrats say more people are coming forward to compete as candidates against Republican office holders.

Some political experts suggest Democrats are following the example of opponents of President Obama.

Conservative Americans formed what was known as the Tea Party in 2009, the first year of the Obama presidency. They showed up at meetings with congressional members to demand that they oppose the Democratic president.

Trump is expected to discuss his early actions as president when he speaks to Congress. He talked a little about his speech Friday during a visit to the Conservative Political Action Conference.

Trump said he is removing undocumented immigrants who carried out crimes. He also said he is ending rules against coal use, and approving a long-delayed oil pipeline to help expand the American economy.

"Basically, all I've done is kept my promise," Trump said.

Jim Malone reported on this story for VOANews. Bruce Alpert adapted his report and did additional reporting. George Grow was the editor.

range - n. a series of numbers that includes the highest and lowest possible amounts

repeal - v. to make a law no longer valid

smash - v. to break something into many pieces

basically - adv. what sometimes comes down to in its simplest form

classified – adj. of or related to something kept secret, often for reasons of national security