Update Required To play the media you will need to either update your browser to a recent version or update your Flash plugin.
By Dan Friedell
28 December, 2016

A few months ago, photographs of carved pumpkins were all over social media. The photos began appearing in October, just before the elections in the United States.

Some of the bright, orange vegetables were cut in such a way to look like the face of Donald Trump. At the time, he was the presidential candidate of the Republican Party. The pumpkins were displayed during Halloween. 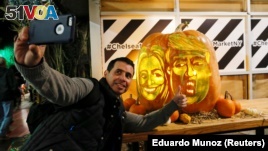 A man takes a selfie next to a giant pumpkin created by Master Carver Hugh McMahon with the faces of 2016 Democratic nominee Hillary Clinton and Republican presidential nominee Donald Trump at Chelsea Market in New York, U.S., October 28, 2016.

As we move closer to 2017, birds seem to be on many people's minds, as they prepare to celebrate the Chinese Year of the Rooster.

On social media, some people are comparing Donald Trump's hair to the colorful, soft feathers of a rooster. In November, the People's Daily newspaper published a photo of a bird with blond feathers, saying it looked like Trump.

But a large shopping center in China went further than that. It crossed an image of the U.S. president-elect with the Year of the Rooster and created a large statue. The photo of the shopping center's new mascot is causing a stir.

The new mascot is a white rooster with gold hair that looks similar to Trump's hair.

The rooster has a gold-colored beak and eyebrows. Its wings are designed to look like fingers.

They appear similar to the way Trump holds his hands while making movements during speeches.

The shopping center is in Taiyuan, about 500 kilometers southwest of Beijing.

Some smaller versions of the mascot are being sold at local stores and on the website Taobao. Prices go from $57 to almost $2,000. That is for a large version of the statue that is almost 10 meters tall.

Broadcaster CNN reported on the story. In its report, one person said, "The rooster is very cute and funny, the hairstyle and eyebrows look very much like Donald Trump. I'm sure it will attract a lot of customers."

On Facebook, many people debated whether the statue is an insult or compliment.

Some wrote that babies born in the Year of the Rooster are supposed to be trustworthy and responsible. So they said it was a compliment.

Others said the statue is funny, and they would like to buy a small one for themselves.

Do you think the statue looks like Donald Trump? Let us know in the comments section.

pumpkin – n. to make (something, such as a sculpture or design) by cutting off pieces of the material it is made of

carve – v. to make (something, such as a sculpture or design) by cutting off pieces of the material it is made of

cause a stir – exp. to cause a reaction