Update Required To play the media you will need to either update your browser to a recent version or update your Flash plugin.
By Jim Dresbach
15 March, 2016


U.S. presidential candidates disagree about who is responsible for violence at recent political rallies.

Republican candidate Donald Trump said he is not responsible for violence at his rallies. But in recent weeks, fighting and conflict has erupted in rallies in Missouri, North Carolina, Ohio and Illinois. In Chicago, a Trump rally was cancelled. 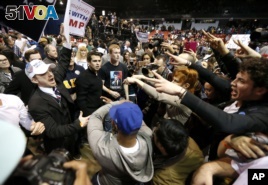 Supporters of Republican presidential candidate Donald Trump, left, face off with protesters after a rally on the campus of the University of Illinois-Chicago was cancelled due to security concerns Friday, March 11, 2016, in Chicago.

"We want peace. ... We don't want trouble," Trump said at an Illinois rally Sunday. Trump then said he may send his supporters to Sanders rallies.

Sanders responded by inviting Trump supporters to any upcoming rally.

"Send them," Sanders said. "They deserve to see what a real honest politician sounds like."

Violence has increased at these political events. In Ohio on Saturday, a protester rushed the stage while Trump was speaking. Secret Service agents stopped the man.

In North Carolina, a Trump supporter assaulted a protester as security guards escorted the protester out of the event.

The Trump protester was charged with assault.

VOANews reported on this story. Jim Dresbach adapted the report for Learning English. Kathleen Struck was the editor.

rally – n. a public meeting to support or oppose someone or something

disrupted – v. to interrupt the normal progress or activity of something

escorted – v. going with someone or something to give protection or guidance

primary elections – n. an election in which members of the same political party run against each other for the chance to be in a larger and more important election