Update Required To play the media you will need to either update your browser to a recent version or update your Flash plugin.
By Mario Ritter Jr.
15 April 2020


The United Nations, China and other countries have urged the United States not to suspend its financial support of the World Health Organization (WHO).

The calls came hours after U.S. President Donald Trump said he was halting American donations to the U.N. health agency. In making the announcement Tuesday, Trump criticized the WHO for failing to investigate early reports of a new coronavirus in China.

On Wednesday in Beijing, China's foreign ministry said that the president's decision to withhold the money would affect all countries. It said the move takes place at an important time in fighting the coronavirus pandemic.

China urged the U.S. government to meet its obligations, saying the decision weakens the WHO and "harms international cooperation." 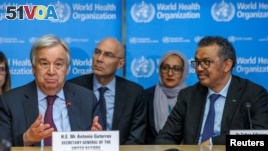 FILE - U.N. Secretary General, Antonio Guterres speaks while sitting next to WHO Director General Tedros Adhanom Ghebreyesus during an update on COVID-19 at WHO headquarters in Geneva, Switzerland, February 24, 2020. (Salvatore Di Nolfi/Pool via REUTERS)

Speaking late Tuesday, United Nations Secretary-General Antonio Guterres said that it was a time for unity and for the international community to stop the virus.

Trump announced that the U.S. government was suspending funding for the World Health Organization pending an investigation. He called for a study of the U.N. agency's reaction to the spread of the new coronavirus. The effort would consider the WHO's part "in severely mismanaging and covering up the spread of the coronavirus," he said.

The United States is the largest donor to the WHO. It provides between $400 and $500 million dollars every year. The U.N. agency operates on a two-year budget.

Around the world, there are now more than 2 million cases of COVID-19, the disease caused by the coronavirus. More than 600,000 of those cases are in the United States. Spain, Italy, Germany and France have also been hard hit. The virus has spread to at least 185 countries.

COVID-19 is blamed for more than 128,000 deaths worldwide. The president has criticized the U.N. agency for not providing enough warning about the disease.

Trump said the WHO made a "disastrous decision" to oppose U.S. restrictions on travel from China. He said the agency put "political correctness above life-saving measures."

Before Tuesday, Trump had signaled his displeasure with the WHO's reaction to the health crisis. The president said the freeze on funding would remain in place "for 60 to 90 days" while U.S. officials consider the WHO's actions.

U.S. Senator Patrick Leahy is a member of the Democratic Party. He criticized the president's actions and said that withholding funds from the WHO made no sense. Leahy also blamed the Trump administration for not doing enough at the beginning of the crisis.

The WHO has praised China for its reaction to the spread of the virus. It also called on other countries to follow China's example. The WHO also praised China's transparency in providing information about the coronavirus.

pandemic – n. the spread of an infectious disease over a large area in a short period of time

obligation – n. something that must be done or that is required by rules or laws

pending – preposition while waiting for something to take place

mismanaging – v. doing a poor job of supervising someone or something