Update Required To play the media you will need to either update your browser to a recent version or update your Flash plugin.
By Mario Ritter
23 January, 2018


International trade is likely to be, again, a main issue for political and business leaders at the World Economic Forum meeting in Davos, Switzerland.

American President Donald Trump plans to attend the meeting in Davos this week. He is the closing speaker at the meeting.

An administration spokeswoman said the president would seek to "promote his policies to strengthen American businesses, American industries and American workers."

The India leader said his country's economy would more than double in size by the year 2025 while fighting climate change. 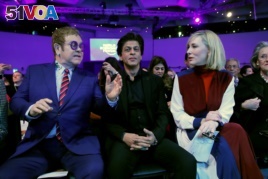 China is sending a delegation of more than 130 people including a top economic advisor Liu He. Last year, Chinese President Xi Jinping attended. He warned against protectionism and trade disputes.

At the time, Xi said that "a trade war will only lead to suffering on both sides."

Tao Ran is an economist at the Brookings Institution, a research group in Washington. He said China's Liu will seek to get the U.S. to limit trade actions against his country.

"I think what Liu He will do is (try) to persuade the U.S. from imposing more trade actions against China," he said.

Recently, the U.S. has drawn criticism for the decision to place taxes on imported washing machines and solar panels. The move largely affects South Korea and China.

The move follows a finding by the U.S. International Trade Commission. Trade officials said that those imported products were a "cause of serious injury to domestic manufacturers."

The U.S. is seeking to place a 20 percent tax on imported washing machines in the first year.

A 30 percent tax on imported solar cells is also being sought. China is a major manufacturer of solar equipment.

The import taxes on both kinds of products are planned to decrease in the second and third years.

India has one of the world's fastest growing economies. It is the world's largest democracy and currently the second most populated country.

Modi said India would greatly increase its use of renewable energy to reduce the effects of climate change.

But Modi said he also was concerned about moves to increase barriers to trade that threatened globalization. He added that, "the solution to this worrisome situation against globalization is not isolation."

In his speech, the Indian leader called climate change a major threat. He added that developed countries needed to provide developing nations, like his own, with more money for new technologies.

Bill Ide reported this story for VOA News. Mario Ritter adapted it for VOA Learning English with additional materials from Victor Beattie, AP and Reuters. Caty Weaver was the editor.

keynote –adj. a main speech given at a gathering usually at the beginning

protectionism –n. helping businesses of one's own country by placing trade barriers on products from other countries

impose –v. to cause something to affect a person, group or process

globalization –n. to cause trade and other social issues to involve the whole world

isolation –n. the state of being separated from others