Update Required To play the media you will need to either update your browser to a recent version or update your Flash plugin.
By George Grow
07 June, 2017


American President Donald Trump says he will nominate a former federal prosecutor as head of the Federal Bureau of Investigation, or FBI.

The president made the announcement Wednesday morning on the online news and social networking service Twitter.

Trump said his nominee will be Christopher Wray, who once represented the government in court. 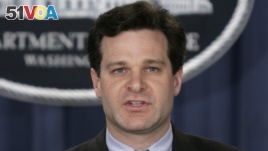 Trump dismissed FBI director James Comey last month. The former official is to meet with a committee of the United States Senate Thursday. The committee is investigating Russian interference in the 2016 U.S. presidential election.

Christopher Wray led the Justice Department's Criminal Division from 2003 to 2005m during the presidency of George W. Bush. Wray led investigations into cheating by businesses at a time when Comey was deputy attorney general.

He also supervised a task force of prosecutors and FBI agents. The group was created to investigate financial wrongdoing at Enron Corporation. The company failed in 2001. Several Enron officials were jailed for their involvement in the case.

Wray is now a criminal defense attorney and a partner at the law offices of King & Spalding. He recently represented New Jersey Governor Chris Christie, an ally of Trump, during an investigation of traffic delays at the George Washington Bridge. Christie and his aides were accused of plotting to close parts of roads leading to the bridge for political purposes.

Two Christie aides were found guilty of the charges. Prosecutors say the aides took the action to hurt a New Jersey official who refused to support the governor.

This story appeared on VOANews.com. George Grow adapted the report for Learning English. Caty Weaver was the editor.

prosecutor – n. a lawyer in a criminal case

online – adj. connected to or involving a computer or telecommunications system

task – adj. of or related to giving someone or something a job to do

attorney – n. someone who is legally appointed to represent someone or something