Trump to N. Korea: All Options Are on the Table

Update Required To play the media you will need to either update your browser to a recent version or update your Flash plugin.
By Hai Do
29 August, 2017


President Donald Trump says "all options are on the table" in connection with North Korea's launch of a missile over Japan.

Trump released a short written statement Tuesday. It said the launch signaled North Korea's "contempt for its neighbors, for all members of the United Nations."

The statement also said that, "Threatening and destabilizing actions only increase the North Korean regime's isolation in the region and among all nations of the world."

Trump later told reporters, "We'll see, we'll see" when asked what he would do about North Korea. Trump was leaving the White House for a trip to examine storm damage in the American state of Texas. 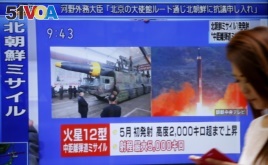 A woman walks past a TV screen broadcasting news of North Korea's missile launch, in Tokyo, Aug. 29, 2017. North Korea fired a ballistic missile from its capital Pyongyang that flew over Japan before plunging into the northern Pacific Ocean.

Hours earlier, North Korea had fired a midrange ballistic missile that flew over Japan's Hokkaido Island and landed in the sea. This marked the first time that North Korea sent a missile over territory of a U.S. ally.

With minutes of the launch, residents on the northern Japanese island received emergency messages on their cellphones. Officials sounded alarms and sent emails telling people to stay indoors. Speakers broadcast a message saying, "missile is passing, missile is passing."

The launch followed three other short-range missile tests last week as the U.S. and South Korea were holding their joint yearly military exercises. North Korea has repeatedly described the exercises as preparation for invasion.

U.S. officials, including former Presidents George W. Bush and Barack Obama, have said "all options on the table" in answer to North Korea's nuclear and missile tests before.

But many experts believe that the North would likely answer a U.S. strike by attacking South Korea or Japan. About 25 million people live in or near the South Korean capital, Seoul, within range of North Korean artillery fire along the border.

The U.S. has said it wants to use economic and diplomatic pressure to win a negotiated solution.

Just last week, Trump praised North Korea's decision to back down from its earlier threats to launch missiles into the sea close to the U.S. Pacific territory of Guam.

He added, "Kim Jong Un, I respect the fact that I believe he is starting to respect us... And maybe, probably not, but maybe something positive can come about."

Trump and Prime Minister Shinzo Abe of Japan spoke on the telephone about the latest missile test. The White House said the two leaders agreed that North Korea creates "a grave and growing direct threat" to the U.S., Japan, South Korea and countries around the world.

Abe said in a statement that Trump also expressed his "strong commitment" to defending Japan.

Hai Do adapted this story for VOA Learning English based on Reuters and Associated Press news reports. Caty Weaver was the editor.