Update Required To play the media you will need to either update your browser to a recent version or update your Flash plugin.
By Bryan Lynn
03 October, 2017


President Donald Trump flew to the island of Puerto Rico Tuesday to meet with its leaders for the first time since a powerful storm hit the U.S. territory two weeks ago.

Trump and his wife Melania landed at an air base near San Juan, the Puerto Rican capital. Aid workers are using the base to direct recovery efforts on the Caribbean island. "I've never seen people working so hard in my life," Trump said. 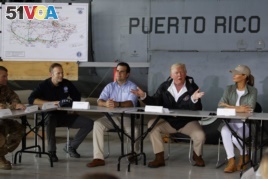 The storm was the strongest to hit Puerto Rico in many years. Maria destroyed its electric power network, as well as many homes, businesses, roads and farms across the island. At least 16 people were killed.

Trump noted the island's relatively low death toll compared with another storm, Hurricane Katrina, which struck the southeastern United States in 2005. Katrina was blamed for more than 1,800 deaths, according to the Federal Emergency Management Agency.

Trump praised the island's recovery efforts and promised an all-out effort to keep providing federal assistance. He praised Puerto Rican officials for offering kind words about the aid. But he admitted that a lot more must be done and called on locals to do more to help aid get to areas outside the city.

Trump met with a number of Puerto Rican officials and shook the hand of San Juan's mayor, Carmen Yulin Cruz.

A few days ago, Cruz strongly criticized the Trump administration for the speed of recovery efforts. Trump reacted by attacking Cruz on Twitter for her "poor leadership." He also suggested her criticism was influenced by politics. In another Twitter post, the president said the people of Puerto Rico "want everything to be done for them."

Trump said he now thinks the mayor may have changed her mind about the recovery efforts. "Well, I think she's come back a long way," he said. "I think it's now acknowledged what a great job we've done, and people are looking at that."

Trump met with hurricane victims at several stops on the island and handed out supplies during a visit to a church. "There's a lot of love in this room," he said, calling those in attendance "great people."

Rossello told reporters on Monday that more than 720 of the island's 1,100 gasoline stations were now up and running, with more fuel supplies expected in coming days.

The governor reported that about half of water and sewer services are still not operational. He added that federal and local officials were working together to keep at least 50 of the island's 69 hospitals operating.

Bryan Lynn wrote this story for VOA Learning English. His story was based on information from VOANews, the Associated Press, Reuters and Agence France-Presse. George Grow was the editor.

network – n. a system of lines or wires that are connected to each other

acknowledge – v. say you accept or agree with something