Update Required To play the media you will need to either update your browser to a recent version or update your Flash plugin.
By Kathleen Struck
24 February, 2016


Donald Trump won another state in his effort to become the Republican Party nominee for president.

He earned 46 percent of the vote in the Nevada caucus. 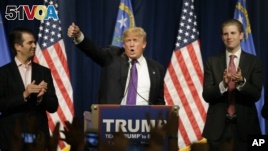 It is Trump's third win in a row after winning primaries in New Hampshire and South Carolina earlier this month.

Trump said he is now "winning the country," and he will pick up more Republican supporters as his rivals drop out of the race.

The next big test for Trump and the other candidates is March 1. That day is called "Super Tuesday."

More than 10 states will hold primaries and caucuses that day.

By then, the Republican nomination process will be almost one-third over. A candidate needs at least 1,237 delegates in order to earn the party's nomination heading into the election in November.

A poll of voters by CNN showed Trump had supporters across most demographic groups.

Trump said he was happy he was the top vote-getter among Hispanic voters in the caucus. He has support even though he said he wants to build a wall between Mexico and the United States. He said he wants Mexico to pay for it.

He says some important questions emerge after Trump's winning streak.

"Where can he be stopped? Where is he deprived of a victory – or multiple victories – and who will do the stopping?"

The answer will become clearer next week.

Dan Friedell wrote this story for Learning English based on reporting by VOANews. Kathleen Struck was the editor.

How do you think Donald Trump will do in the events of Super Tuesday? Write to us in the Comments Section or on 51VOA.COM.

streak – n. a period of repeated success or failure

in a row – n. following one after another

demographic – n. the qualities (such as age, sex, and income) of a specific group of people

primary – n. an election in which members of the same political party run against each other for the chance to be in a larger and more important election