Trump: US to Withdraw From Trans-Pacific Trade Deal

Update Required To play the media you will need to either update your browser to a recent version or update your Flash plugin.
By VOA
23 November, 2016


President-elect Donald Trump says the United States will withdraw from the Trans-Pacific Partnership (TPP) trade deal on his first day in office.

Trump promised to block the trade deal during his successful campaign for the presidency.

In a short YouTube video Tuesday, Trump spoke about plans for his administration.

What About the Other TPP Nations?

Some questioned whether the other countries in the TPP would move ahead with the trade deal without the United States.

But Japanese Prime Minster Shinzo Abe said the trade deal is "meaningless without the United States." According to the U.S. Commerce Department, the United States is responsible for about 60 percent of economic production among the TPP countries.

Last week, Abe was the first foreign leader to meet with Trump since he won the U.S. presidential election over Democrat Hillary Clinton. 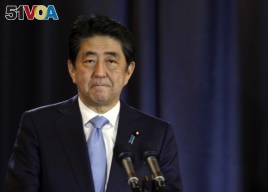 In his video speech, Trump said he would give notice of his "intent to withdraw" from the TPP deal on the first day of his administration. He also promised to "negotiate fair, bilateral trade deals that bring jobs and industry back onto American shores."

That means he would seek to reach trade deals with individual nations rather than groups of nations.

Rajiv Biswas is chief economist for IHS Global in Singapore. He expects the other 11 TPP nations to negotiate other free-trade deals that will likely give more trade openings to China.

"The United States isn't an island," Key said. "It can't just sit there and say it's not going to trade with the rest of the world."

President Barack Obama was in Lima, Peru recently for the Asia-Pacific Economic Cooperation (APEC) group meeting. The meeting was part of his last scheduled foreign trip as president.

Obama and other Pacific leaders said they continue to support free trade. Obama said free trade can "improve the lives of billions of people around the world."

But Obama spoke about the message of American voters during the November 8 presidential election. Trump ran on a promise to bring back American manufacturing jobs that he says were lost mainly because of unfair trade deals.

Obama said there are benefits to free trade. But, he added that large corporations and the wealthy "often seem to be playing by a different set of rules."

"The gaps between the rich and everyone else grow wider," Obama said.

In September, John Kerry, Obama's secretary of state, spoke about the effects of not approving the Pacific trade deal.

"We take away from our ability to shape the course of events in a region that includes more than a quarter of the world's population -- and where much of the history of the 21st century is going to be written," Kerry said.

In his brief video speech Tuesday, Trump said he would direct the Labor Department to look into visa abuses. During the campaign, Trump said some companies use visas to bring foreign workers into the United States. He said this takes jobs away from American workers.

Trump also promised to end regulations that he said hurt American energy production. In addition, Trump said he would ask American military officials to develop a plan to protect America from "cyber-attacks and all other form of attacks."

He did not speak about his campaign promises to build a big wall along the United States' southern border or to end President Obama's health care law -- often called "Obamacare."

Bruce Alpert reported on this story for VOA Learning English based on reports from VOA, the Associated Press and Reuters. Mario Ritter was the editor.

innovation - n. the act or process of introducing new ideas, devices, or methods

intent - n. what you plan to do

shore - n. the land along the edge of an area of water

scheduled - adj. a plan to do something at a certain time

cyber-attack - n. an attack by people who want to damage, destroy or get information from a computer system