Trump Wonders If Climate Will ‘Change Back Again’

Update Required To play the media you will need to either update your browser to a recent version or update your Flash plugin.
By Kelly Jean Kelly
24 October, 2018


American President Donald Trump has said many times in the past that he does not think climate change is real.

In a recent television appearance, however, Trump seemed to agree in part with recent scientific and government reports. "Something is changing and it'll change back again," he said.

Yet, climate scientists say Trump's position is wrong. They say human activities are responsible for about 90 percent of climate change. Most of those activities are connected to burning coal and natural gas for electricity, or burning gasoline and other fuel for transportation. 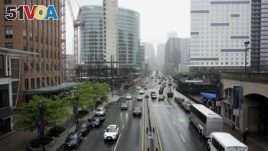 Some activists and researchers complain Boston and other cities are not doing enough to deal with climate change. (AP Photo/Steven Senne)

Such activities release heat-trapping gasses that are warming Earth.

Scientists have been showing governments evidence of this for more than 20 years, said Princeton University climate scientist Michael Oppenheimer. He said it cannot be disputed.

Oppenheimer told the Associated Press, "Humans are causing most of the warming."

How do scientists know?

One way scientists are able to know that humans are causing the Earth's temperature to rise is by measuring the planet's energy balance. In other words, they measure the energy that comes in and goes out, said Stanford University climate scientist Noah Diffenbaugh.

These measurements show that, since the late 1800s, the average surface temperature of the planet has become about 1 degree Celsius warmer. Most of that warming has happened since the 1980s.

Researchers with the U.S. Global Change Research Program found that natural causes, such as the sun and volcanoes, have had minor involvement in the temperature rise. The researchers said most of the temperature rise was the result of heat-trapping gases, air pollution and changes in land use that release and absorb carbon. All of these energy sources are the result of human activities.

The report concluded that humans had caused at least 93 percent of the changes scientists measured from 1951 to 2010.

Climate scientist Michael Oppenheimer says another piece of evidence for man-made climate change is that the world has warmed in exactly the way physicists had predicted.

Physicists who studied the effect of heat-trapping gases said the air about 10 kilometers above the Earth's surface would cool. And it has, Oppenheimer said. Satellite measurements since the 1980s show the lower atmosphere is becoming warmer, but the upper atmosphere is getting cooler. If the warming had come from changes in the sun's energy, the upper air would not have cooled.

Climate change scientists also expected that heat-trapping gases would cause the North Pole and the South Pole to warm faster than the rest of the Earth. That has happened, too, said Columbia University climate scientist Adam Sobel. The American space agency NASA reports that the ice sheets in Greenland and Antarctica are severely decreasing.

Scientists continue to document other major effects in the Earth's ecosystem as a result of climate change. The journal PLOS published the findings this month of scientists who studied insects in the rain forest of Puerto Rico. They found that insects and other creatures with external skeletons "are declining at an alarming rate."

At the same time, the populations of animals that eat these creatures – lizards, frogs, and birds –also have declined.

The researchers note that temperatures in the forest have risen 2 degrees Celsius since the 1980s. They said their study shows that "climate warming is the driving force behind the collapse of the forest's food web."

Will it change back?

Do scientists think the Earth's climate could "change back again" as the American president suggested?

Science writer Seth Borenstein says it may be possible, but only if humans "drastically and permanently cut back" on activities that release heat-trapping gasses.

Kelly Jean Kelly wrote this story for Learning English based on reports from the Associated Press, NASA, and the journal PLOS. Ashley Thompson was the editor.

absorb - v. to take in (something, such as a liquid) in a natural or gradual way