Turkey: A Case of Mistaken Identity

Update Required To play the media you will need to either update your browser to a recent version or update your Flash plugin.
By VOA
26 November, 2014


And now another edition of Words and Their Stories, a VOA Learning English program about American expressions.

Thanksgiving is one of the biggest American holidays. And Thanksgiving dinner is the center of the holiday.

And at the center of Thanksgiving dinner is the turkey. 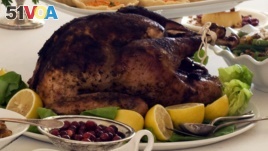 Turkey is the "star" of the Thanksgiving Day meal.

Our listeners may be wondering why the word "turkey" describes both a country and a bird that Americans eat for Thanksgiving dinner.

Many think the bird comes from the nation of Turkey. But turkey is not from Turkey.

In fact, the fact that the turkey bird is called by that name is one big mistake. We could say it is a case of mistaken identity.

Since Americans are celebrating Thanksgiving, it is time to set the record straight.

First of all, "Turkey" has meant the "land of the Turks" since ancient times. The word turkey, referring to the bird, first appears in the English language around 1540. And the misunderstanding over the word turkey happened because of birds that look similar.

This is the case of mistaken identity that we spoke of before.

First, there is an African bird called the guinea fowl. It has dark feathers with white spots and a patch of brown on the back of its neck. Portuguese traders brought the guinea fowl to Europe through North Africa.

This foreign bird came to Europe through Turkish lands. So, the English thought of the bird as a "Turkish chicken."

When the Europeans moved to North America, they saw a bird that looked like the guinea fowl. Orin Hargraves is a lexicographer, someone who writes dictionaries. Mr. Hargraves explains what happened:

"Some Europeans saw an American turkey, thought that it was the guinea fowl, which at that time was called the "turkey cock" and so gave it the same name."

And so now we call this North American bird turkey even though it has no connection at all with the country Turkey ... or even with Europe, for that matter.

Now we call that bird turkey because somebody misnamed it. They thought it looked like this bird of African origin -- a bird that came at first from Africa.

And there is another piece to the puzzle. The case of mistaken identity crosses land and language borders.

The Turkish, for their part, call the North American bird "hindi," the Turkish name for India. The reference to India probably comes from the old, wrong idea that the New World was in Eastern Asia.

Sometimes, that is how language changes over time – by mistakes.

Another interesting fact about the turkey is that it almost became the national bird of the United States. Some people thought it should be the symbol of the U.S.

But today, of course, you will see the bald eagle on the Presidential Seal of the United States. Founding father Benjamin Franklin did not think the eagle was a good symbol for the new country. He thought the eagle was "lazy" and "of bad moral character" because it stole food from other birds. He thought that the turkey was a "more respectable bird" and a "true original native of America."

And that's it for this episode of Words and Their Stories. Join us again next week, when we explore the story behind American English.