Update Required To play the media you will need to either update your browser to a recent version or update your Flash plugin.
By Bryan Lynn
29 June, 2016


The suicide attack in Istanbul that killed at least 41 people is the latest in a series of deadly terrorism strikes to hit Turkey.

Officials announced Wednesday that the airport had fully reopened. Turkish Airlines said it restarted all operations and flights resumed between the United States and Istanbul.

No group has claimed responsibility for the attack. But, Turkish Prime Minister Binali Yildirim said early evidence suggested that it was the Islamic State group.

He called the attack "cowardly" and promised to keep up Turkey's fight against extremism. "Unity will be the best answer to terrorists," he said. 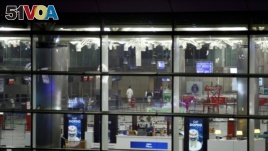 The Islamic State group was blamed for two suicide bombings in Istanbul earlier this year that targeted foreign tourists. Many people have been killed in Ankara and Istanbul in bombings carried out by both Islamic State and Kurdish rebels.

The Kurdish rebel group PKK has been known to carry out suicide bombings. However, it usually targets government security forces. This month the group attacked a police bus, killing 11 people.

The recent attacks underscore the sharp increase in recent terrorist bombings in Turkey that have killed hundreds. Some of the attacks have been blamed on the PKK, while others have been attributed to Islamic State.

Terrorism experts say Islamic State is believed to have many fighters who are Turkish nationals. They also suggested that recent Islamic State defeats in Iraq may have led to Tuesday's airport attack.

The Institute for the Study of War predicted an increase in Islamic State attacks in Turkey during the Islamic holy month of Ramadan, which ends July 5. The institute said Islamic State appears to be using Turkey to help develop a larger plan in the area.

"ISIS will likely select targets in neighboring states that relieve pressure from the group in Syria while setting conditions for future expansion in those states," the organization wrote. "Targets that serve this dual purpose include foreign tourists, state security forces, and U.S. military elements in Turkey and Jordan."

Another regional issue affecting terrorism in Turkey is Syria's civil war. Armed groups roam along both sides of the 804-kilometer Turkey-Syria border. Turkey has been accused of permitting foreign fighters to cross the border to join groups like the Islamic State.

The civil war has also led to an estimated 2.5 million Syrians now living in Turkey. This has strained government resources and caused anger among the Turkish population.

Turkey was once seen as a bastion of stability in the area, with a strong economy and tourist industry. But last year, tourist arrivals fell by one-third.

The increase in terror has led to increasing uncertainty about Turkey's economic future and its national security.

Bryan Lynn adapted this story for Learning English based on reporting from Sharon Behn of VOA, with additional reports from VOANews and the Associated Press. Mario Ritter was the editor.

cowardly – adj. afraid in a way that makes you unable to do what is right or expected; lacking courage

underscore – v. to emphasize or show the importance of

attribute – v. considered to be caused by something

roam – v. move about or travel over a wide area

bastion – n. a place or system in which something continues to survive