As Turkey Arrest Coup Plotters, US Warns of Going ‘Too Far’

Update Required To play the media you will need to either update your browser to a recent version or update your Flash plugin.
By Mario Ritter
18 July, 2016


U.S. Secretary of State John Kerry said Monday he wants those who attempted to seize power in Turkey to be brought to justice.

But, Kerry warned the government against going "too far" while seeking to return order to the country.

"We will certainly support bringing the perpetrators of the coup to justice, but we also caution against a reach that goes well beyond that. And stress the importance of the democratic rule being upheld." 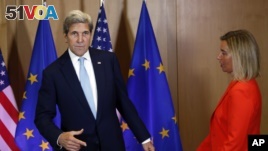 Kerry spoke at a news conference after a meeting with EU foreign ministers in Brussels, Belgium. He said, "We stand squarely on the side of the elected leadership in Turkey." He added, "But we also firmly urge the government of Turkey to maintain calm and stability throughout the country."

State-operated news agency Anadolu reports that 8,777 officers have been suspended. The news agency said about 6,000 members of the judiciary and military have been detained.

However, world leaders are voicing concern and are warning against actions that would harm constitutional order.

EU foreign policy chief Federica Mogherini also spoke at the meeting in Brussels. She said the rule of law "needs to be protected for the sake of the country."

Conditions remained tense in Istanbul, Ankara and some other provincial cities.

Many have been arrested in search for plotters

Turkish President Recep Tayyip Erdogan has promised to find people involved in the attempted coup. He compared those involved to a virus saying, "At every level of government, the period of cleaning this virus will continue."

State-operated media report that an assistant to Erdogan is among those being held. Also, an arrest order has been given for Erdogan's top military aide, Colonel Ali Yazici. It was not immediately clear whether Yazici had any part in the failed coup attempt.

Justice Minister Bekir Bozdag says Turkish officials are increasing the number of arrests. Those detained include judges, military officers and soldiers. The commander of the Third Army Corps, General Erdal Ozturk, was also seized. He could face charges of treason.

Other high-ranking military officials went to neighboring Greece by helicopter and requested political asylum. Turkish media reports say some of those who fled are believed to be among those who planned the coup.

The possible use of the death penalty has become an issue

Erdogan spoke to a crowd outside his home in Istanbul on Sunday. Many in the crowd reportedly supported the death penalty for some involved in the coup. Erdogan said the use of capital punishment cannot be delayed.

People in the crowd reportedly called for the death penalty. Erdogan is said to have answered, "We hear your request. In a democracy, whatever the people want they will get.''

Erdogan said he would discuss punishment with opposition parties. However, he said, "We will not delay this decision for long because those who attempt a coup in this country must pay.''

Turkey has not executed anyone since 1984. Capital punishment was legally ended in 2004 as part of Turkey's attempt to join the European Union.

On Monday, Austrian foreign minister Sebastian Kurz said reintroducing the death penalty would be "absolutely unacceptable." He spoke during an interview with state media.

Secretary Kerry also has denounced suggestions that the U.S. was involved in Friday's failed coup in Turkey

"We think it's irresponsible to have accusations of American involvement," Kerry told CNN on Sunday.

Turkish President Erdogan has accused religious leader Fethullah Gulen of planning the attempt to seize power. Gulen now lives in the United States. Erdogan has demanded that Gulen be returned to Turkey.

The U.S. State Department reports that Turkey's foreign minister has denounced claims of U.S. involvement. The minister said in a telephone call such claims are "harmful to our bilateral relations."

Kerry also told CNN that Turkey has made no official request for Gulen to be returned to Turkey. He added that, "The United States is not harboring anybody."

Gulen has denied involvement in the coup and has denied knowledge of who might be responsible.

Turkey mourns those who lost their lives 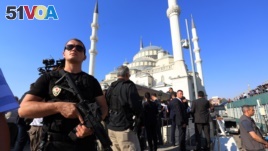 A Turkish special security force member stands during a mass funeral for the victims of a failed military coup last Friday, at Kocatepe Mosque in Ankara, Turkey, July 17, 2016.

Reports differ about how many people were killed in clashes during the coup attempt. On Sunday about 265 were reported dead, including many civilians.

In Istanbul and Ankara this weekend, thousands of people attended funerals for those killed. Prayers were read in Turkey's 85,000 mosques at noon on Sunday to honor those who died.

Turkey had closed its airspace following the attempted coup.

Turkey is a member of the North Atlantic Treaty Organization. The country is an important partner in U.S.-led efforts to defeat the Islamic State group. Turkey also has permitted American jets to use its Incirlik air base to fly missions against extremists in nearby Syria and Iraq.

perpetrators –n. people who carry out an act, usually something illegal

stability –n. not an extreme state, remaining within the rules

harboring –v. to provide shelter or a safe place for someone