Update Required To play the media you will need to either update your browser to a recent version or update your Flash plugin.
By Ashley Thompson
22 April, 2015


Turkey is officially a secular country. But 99 percent of the population is Muslim. Many of these people are deeply religious.

The country's atheists -- those who do not believe in God or gods -- say they have started to feel increasingly threatened and unsafe. They say the country's pro-Islamist government has caused a rise of intolerance towards atheists.

Onur Romano is a leading member of Turkey's Atheism Association. Every day, he opens the office and checks the mail. It often includes frightening messages. 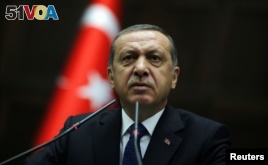 "Sometimes they send photos of some al-Qaida members chopping people's heads off and putting all the heads in a bucket. They tell us that your head is going to be in one of those buckets one day. That's how you are going to leave your office, stuff like that."

He says the organization often receives death threats on Facebook, Twitter, over e-mail, and over the phone. They now have three security cameras and two panic buttons. These electronic devices send emergency messages to the local police if the office is attacked.

But the threats do not stop the organization. Mr. Romano says it is determined to change people's views of atheists.

"We don't insult religion, we don't insult people's values. All we are trying to establish here is to tell people what atheism is and who is an atheist."

He says many Muslims in the country believe atheists have no ethical values.

"For them, ethics equals religion."

Over the past year, people in Turkey have been jailed for questioning God's existence on Twitter. They are charged under a law against inciting religious hatred. Last month, officials used the same law to ban 48 websites. They included the website for the French magazine Charlie Hebdo, and the Turkish Atheism Association's own website.

At their weekly meeting, members discuss the ban.

One member, who did not want to provide her name, says the meetings are a chance to talk with other atheists. She says many atheists in Turkey are too frightened to admit their views, even to their families.

"Unfortunately, people does not even want to say, because they are scared to lose their job, they are scared to have trouble with their family as well. I had [a] big problem with my family. My mother told me that [she is] going to the government, and say it's not my daughter anymore. And I told her, 'OK, if it's the way it is for you, if it is the right thing to do go ahead,' because it's not going to change what I am."

Tolga Incir is the president of the Atheism Association. Last month, he received a direct death threat from the leader of a Sharia society. Mr. Incir says the threat is more serious than usual but that there is little he can do.

"When we founded this association, we were aware that we were risking things, in a country like this, especially. I will not be surprised if thousands of people are thinking the same — that atheists should be killed. I carry on with my life and if it happens, it happens."

Mr. Incir says his group's biggest concern is not Turks but foreign militants. He says many of them spend time in Istanbul on their way to Syria.

Next month, Mr. Incir and other atheists will celebrate the organization's first anniversary with a march through the center of Istanbul.

secular – adj. of, relating to, or controlled by the government rather than by the church

atheist – n. a person who believes that God does not exist

intolerance – n. unwillingness to accept views, beliefs, or behavior that differ from one's own

panic button – n. a button in a bank, store, etc., that a person can press to call for help during an emergency

determined – adj. having a strong feeling that you are going to do something and that you will not allow anyone or anything to stop you

How are atheists treated in your country? We want to hear from you. Write to us in the comments section.